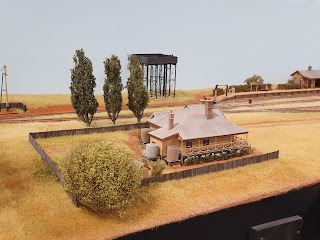 Getting Narellan Ready for the Rosehill Gardens Race Course Exhibition

As mentioned in my last blog, Narellan as a layout ran well except that I had failure with one of my Austrains 30 Class Tank engines which needed to be repaired before the Rosehill Exhibition. I was able to successfully get it back up and running again but only after a few lap where it decided to fail again. Looks like it is the motor that is failing in this unit. I decided to try and repair the other 30 Class Tank loco that I failed due to some debris finding itself into the gears, however it ended up being a task that would take too long to fix which would impact on other items that I wanted to complete for the upcoming exhibition. Luckily, I did get a few more Austrains 30 Class Tanks which I was able to install lokpilot mini chips non-sound in which ensured I had plenty of 30 class locomotives on standby if my last remaining DCC sound chip 30 class was to join the group of the other 30 class tank locomotives that are pending repair in my workshop. 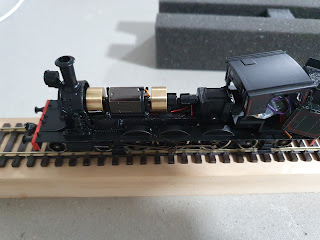 Trying to resurrect one of my failed 30 Classes 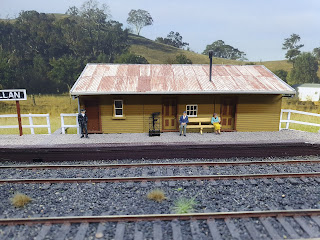 This was a simple kit to build which only took an hour for me to build up. I certainly recommend this kit to anyone who has not yet got into kits that requires bending Brass etched parts. 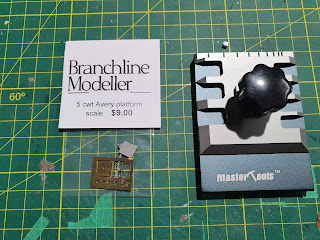 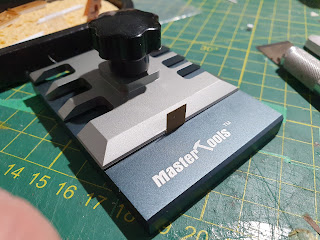 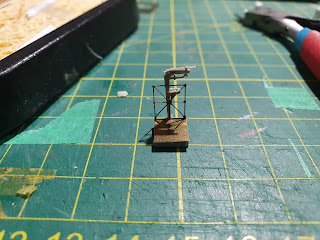 The kit assembly of the Branchline Modeller Scale Kit

The other addition was the Station Master figure which was placed onto the platform of Narellan Station. This was one that I got from Andlan Models. I outsourced the painting of the figure to my brother InLaw, who is big on painting figures for Wargaming. I do have a many other figures painted, such as engine drivers and fireman, but with the issues I had with the 30 Class Tanks, I have decided install them later on once I have confidence that all issues are resolved.

The Way & Works train was something that I was going to run at the exhibition. I was able to find some woodlands scenic packs that included suitable figures that could ride on this train. As this was one of the last items I worked on and I was pushed for time. This prevented me in doing proper a test run. Therefore, I only got to do my first test it before the opening of the exhibition it was derailing. However, I will workout what needs to be sorted before the next event for Narellan, whenever that will be. 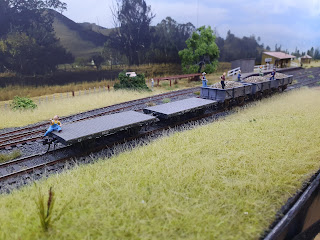 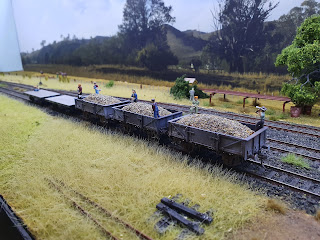 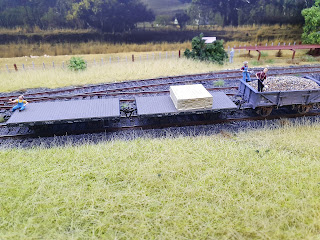 Way & Works train that was intended for the Exhibition
Exhibition Weekend
Set up of Narellan was simple quick and the testing of the Running of trains had successful results during the Friday Setup.
Saturday the various trains that was relevant for Narellan was setup in the fiddle yard ready to go. The Layout functioned well and there was hardly any glitches experienced throughout the entire weekend which I was delighted about.
Certainly, Narellan attracted a lot of conversation with the paying crowd and other exhibitors which it was not until late in the afternoon on both days that I could take a break. However, that is not a bad thing as I took this as a compliment to the appreciation that others had in my efforts that I put into Narellan. Closing off on my Narellan exhibit, I would just like to thank those who provided the nice  compliments and I hope that it has inspired others into building their own layout/s that they could bring along to exhibitions like the one at Rosehill. As always, it was also great to see many of the friends that I have accumulated over the years at the event, some of which I have not seen in person for almost two and a half years.
Other Exhibits
I did get a little time to roam around the exhibition, however, I took more videos than photos, so I have only a few shots to share in this blog. 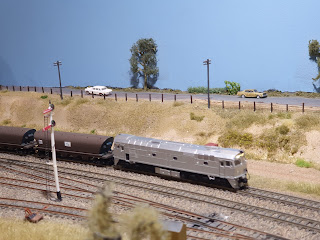 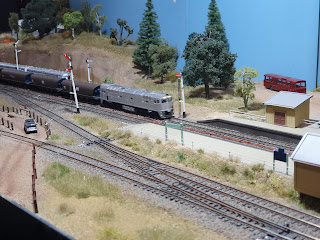 Roberts P Gunning Layout had the first prototype of the Upcoming N Scale 80 Class from Auscission  Models. It had the DCC sound chip in this model and sounded nice. It could pull a decent load. It should be noted that the trailing rolling stock are not from Auscission. 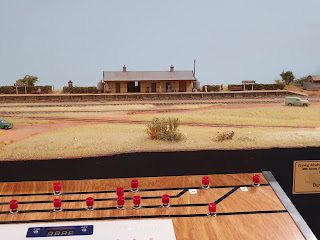 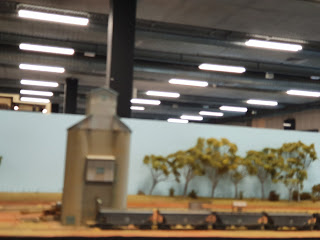 Burrowa in a more extended version than its last exhibit 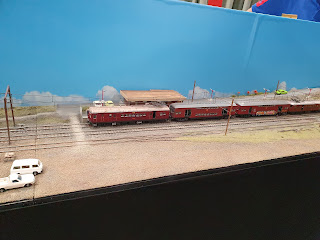 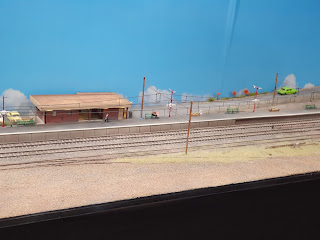 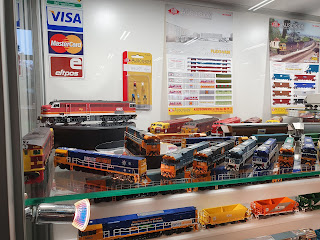 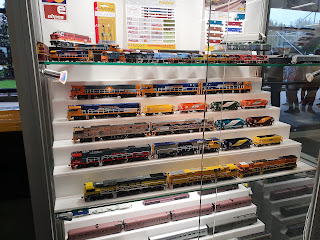 Auscission Models upcoming products both in HO and N Scale 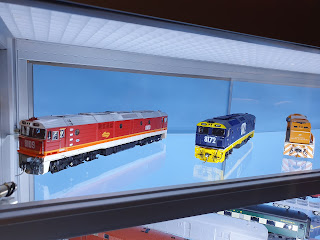 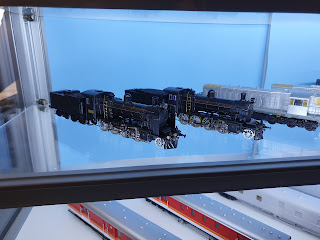 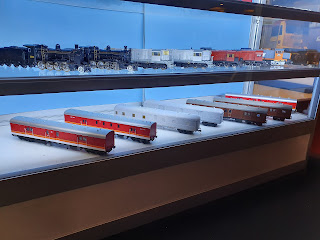 SDS Models Upcoming products
Certainly, heaps of Layouts and stores that were present at this event. But when you are running a layout and you have one of your trusted friends to step in, I had very limited time to look and make purchases.
However, I do want to give out a huge compliment out to the Railway Modeller of the Carlingford HO layout as he certainly done a fantastic job. I did want have a word with him at the Exhibition and compliment him person, but he was busy at the time I was able to view this layout.
Also a big kudos to the Organisers from the Epping Model Railway club who organised this successful event.
The Auscission Bargain Bin
Many of us who attend Model Rail exhibitions that Auscission attend will be aware of their Infamous Bargain Bin. These seem to be mainly returned items, factory seconds or other conditions. I have done well in the past in purchasing items of the Auscission Bargain Bin. Either way, it is a roll of the dice when purchasing these items. The following are the end results of my purchases.
I ended up getting 2 x 85 class Electric Locomotives in FrieghtCorp Blue livery and a 442 in Reverse Livery. Each item cost $150 each making my total purchase of $450 (which is close to the price to a  new Auscission model in DCC like the 442). Here is the outcome of this purchase.
1 x 85 class Electric Locomotive is a Dummy Unit (no motor or gears in it).
1 x 85 class Electric Locomotive tested as working. Missing one step at one of the doorways.
1 x 442 class Diesel Locomotive Tested as working, but part of the Fuel Tank detached from the Model. The detached fuel tank was still in the blister package.
Not a bad outcome, even though I got a Dummy 85 class loco, it can easily run with the 85 class loco that works. And as for the missing step on the working unit, I think I can easily manufacture another step.
442 Locomotive, I can simply glue the portion of the Fuel Tank that detached itself and wether it up. I will I make the decision later on if I will make it into a DCC runner or not.
Albury Model Rail Exhibition
On the 21-May-22, Myself and a few of my model rail friends made the trip down to the Albury Model Train Show. For once, I was attending this show as a paying member of the public not as an exhibitor.
Even though this Exhibition may not be to the size compared to the other exhibitions within major cities, the journey down was surely worth it in my point of view.

Unlike other occasions, I took several photographs of the exhibits at the show. Unfortunately, I did not make note of the name of the exhibits that were on display. But here are some the photos I took. 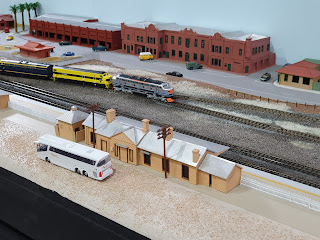 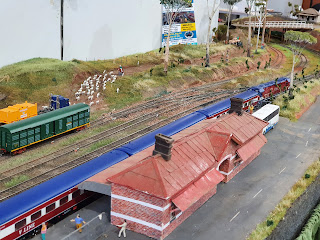 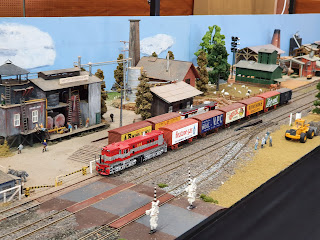 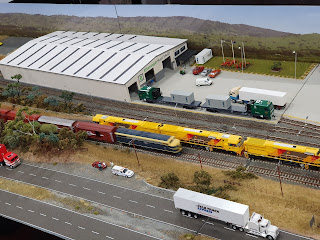 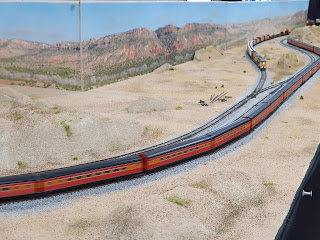 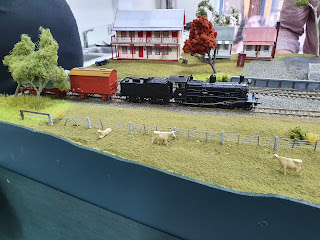 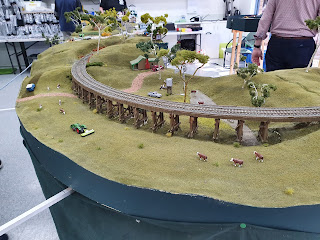 Not sure when the next Exhibition going to be for me either as an exhibitor or as a paying member of public going to be as it should be noted that a few model rail events are not going ahead this year. At this moment, it looks like that I have to look forward to whats is on the 2023 calendar.

On that note, better to get back into the workshop and get some model rail projects back on track.