The Electronics of Narellan

From my last post, I stated that I will keep the wiring and electronics for Narellan as its own blog. The reason for this is that the electronics work is a large and a time consuming task to do. For me personally, electronics is not a difficult subject as it was something that I did as a hobby a lot during my younger days, but still it can be a confusing task for many out there.

This post will be more of a reflection on my experience in wiring up Narellan rather than a how to do post. In the end I managed to get it completed in a functional state, also resulting in the swear jar getting filled up a several times over.

Layout Electronics Boring But Important
Not matter how well the layout is presented, if the electronics are not properly in place to allow for the smooth operation of the layout, it has an impact on the level of enjoyment both from those operating the layout and for those watching the trains run on the layout.
My suggestion to anyone before wiring a layout or deciding to use DC or DCC options is to do some searching on the Internet or Youtube as there are some straight to the point videos and instructions where there are some presenters that have gone to the trouble to demonstrate the difference how each of them work in practice. They also highlight the typical scenarios will be faced and present on what solutions that are out there to overcome these challenges.

In general, there are solutions that are low budget and high budget which I will not go into too much detail. 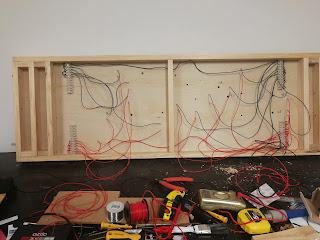 Wiring work in its early stage

Narellan Electronics
Electronics for Narellan are as follows:
- Wiring up the track work for DCC operations
- Points, Point motors and Point switching
- DCC Bus Wiring
- Lighting for the layout

Aim: Is to try and keep wiring to a minimum and ensure that any electronic component is not at risk of getting damaged at during transportation or storage. Also have smooth running especially for DCC Sound chipped Locomotives.

Points And Point Switching
For the Fiddle Yard for Narellan, I selected Peco Code 75 Electrofrog Points. Peco Electrofrog points do get provided with, some clear instructions on on how to wire them up on their packaging.

For the Point Motors, I opted for the Gaugemaster PM4 Self Latching SEEP Point Motors more so for their compact size and their compatibility to work with Peco Points. It is worth making this point about the PM4 Self Latching that they have a spring that is meant to help with the throw of the point. I was sold on that spring being there as I was thinking if the spring that is in built into the Peco point became sprung that the spring in the point motor would act as a fall back option removing the need to replace a point. However, I found out later that the spring ended up being a big hinderance then a help, as it was working against the point throw and some times preventing the point from throwing at all. That issue ended up getting resolved by removing the spring from the point motor. After I removed the springs the points were able to be thrown with no issue. Therefore, I should have opted for the PM2 SEEP Motors from Gaugemaster as they do not have the spring installed but has the same features as the PM4. Both the PM2 and PM4 both have the circuitry build in to allow for the polarity change to the frog in the point each time the point switches across. I should also highlight that SEEP motors (or Solenoid motors) will only work with Peco or Hornby Track as they are spring loaded as other track such as handmade or non spring loaded points may not be able to handle the impacted of the point throw from a solenoid motor. 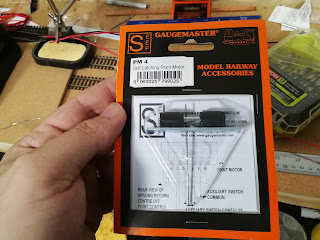 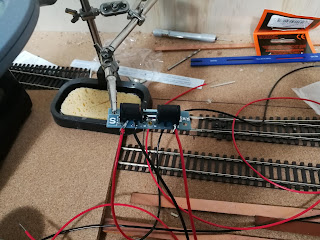 For the Point Switching Control I did a fair bit of searching around to find an effective solution. Having operated from different Layouts in the past, I have found scenarios where I have to move from one side of the lay out to the other just to set the path for a train to route through. Or the point switching panel is positioned elsewhere on the layout away from the controller.

During my researching, one of my model Rail Friends mention these Colbalt AD Solenoid Decoders that are manufactured by DCC Concepts. They are basically a device that has a cover protecting the electronic components (as many point switch solutions have their electronic components exposed) but provides a number of options such as switching points via your DCC Controller or via a switch. They also provide a feed to the Frog that switches polarity and even has outputs for LED's if you  wish to light up the current status of point on a track diagram of your layout. 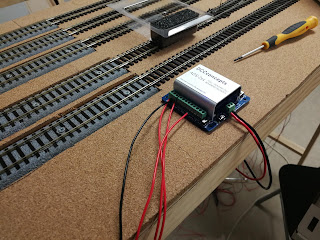 AD-S2sx Solenoid Decoder being tested out before its installation 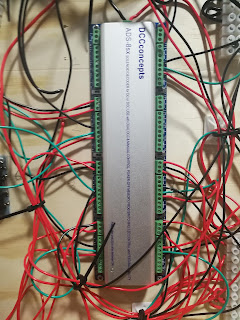 I opted for this solution as I would be able to still run trains and be able via number of programmed Macros (which you pre-program) to set the respective points for the route you desire your train to run on. This removes the need to constantly running around the layout setting points all of the time.

Also these Colbalt AD Solenoid Decoders only needed to be connected to the DCC bus to be powered up, hence removing the need for additional power supply just for the switching function.

However, they have their disadvantages, which I only encountered during installation of these units. I would like to share these issues just for awareness, which may prevent others making the same error as well as something to take into consideration when purchasing these AD Solenoid Decoders.

First issue I had, with one of the AD-S2sx units. I spend a full day of wiring which does numb your thinking after a few hours and I accidentally connected what was supposed to be the DCC feeds for the Frog feed into one of the LED outputs. When I powered up the layout later on, one of the points was not throwing. I traced the point wiring it back to the AD-S2sx and worked out that I wired it incorrectly. I then wired it correctly, however, the point motor was constantly clicking. This wiring error has not only caused the particular point output to be no longer functioning, it also the impacted unit which was also getting very hot. I had to trash that AD-S2sx unit and was lucky just to get the last one at the supplier that I have acquired these AD-S Units from. 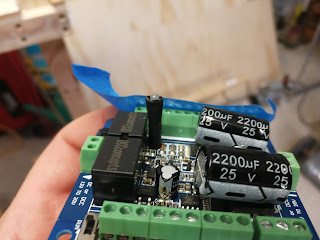 The AD-S2sx that became defective after the incorrect wiring incident

Second Issue, Myself and another Model Rail Friend of mine, were doing the fine tuning of the points, making sure no shorts circuits were happening when running trains and making sure that the point throws were consistent to what was executed on the DCC Controller. We made the error of changing the wiring to one of points connected to the AD-S8sx unit whilst still powered up. We started to hear a point motor that was constantly clicking. Darn it, another point output gone and on the more expensive AD-S8sx unit. Fortunately, there was two spare outputs I was able to use and the high temperature issue that was observed in the AD-S2sx case was not present.

So to sum up the learnings here, make sure the wiring is correct, validate the wiring. Power down and use the CDU Discharge button to drain the unit of power if you need to do any wiring work. If you follow these learnings, you will avoid damaging your AD-S8sx or ADS2sx unit. Hopefully in future versions of these Solenoid decoders DCC Concepts build in some failsafes to prevent these issues from happening. Other than these issues once they are setup correctly, they do work well and I would definitely still consider using these Solenoid Decoders for future projects.

My personal recommendation after installing these Solenoid Decoders, is to just get the two point output (AD-S2sx) unit more to the reasons that you can install them close to the points that need to be connected, removes the need to have bridging wiring from another module (as in Layout or Fiddle Yard Module. If your Solenoid controller was to fail, it is also cheaper to replace a ADS2sx compared to the ADS8sx. The instruction state that you should be able to throw two point motors from the same output, but I was not able to achieve that when trying this throw two point from the same output. I did these tests with the springs still installed in the Point Motors. My feeling is that the dural connected solenoid concept will most likely only work on smaller solenoid motors like for N Scale point motors as I just could not get much of a budge with any of the 2 x point motors when trying this out.


DCC Bus Wiring and Wiring up the track work for DCC operations
I won't go into too much technical detail for the DCC bus wiring. Basically I have made use of the track and provided DCC Power feeds to each of the section of Track that was between points that where isolated. I basically created a Positive and negative DCC Bus ring circuit and from that it seems no issues with getting DCC Power delivered to every bit of track on the layout.

I will not show much of my completed wiring effort yet as it was a bit of a rush job to get it ready for the Modelling the Railways of NSW Convention back in May, but intend to do some tidy up work on it later on.

Lighting for the layout
For an exhibition Layout, one thing I have observed in the past is, that florescent lights present a flickering on video and can take up a some valuable space when traveling to events if they are not permanently fixed to the layout. 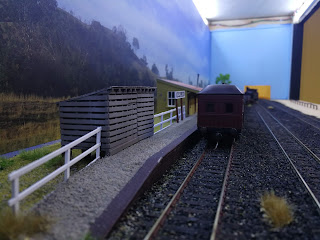 LED Strips are noticeable on the to right hand corner of this picture. I have used 4 LED Strips for each scenic module


To close this blog off, I will like to place in some links for reference

Chadwick Model Railway - Model Railway DCC Bus Wiring (Note: As mentioned in this blog, I have made a DCC Bus ring circuit. Charlie the Presenter has made note to place a break in the ring to prevent any timing issues. I would agree on that point in theory. However, no issues have been encountered yet with my DCC Bus ring circuit. Perhaps an issue for larger layouts. Either way, a good presentation on DCC Bus Wiring and worth watching).
https://www.youtube.com/watch?v=I5ief4AZ5ys&t=204s

Everard Junction - How to - Episode 6 - Install a point motor
(Note: Good explanation provided from the presenter on seep motors, wiring and and their additional benefits)
https://www.youtube.com/watch?v=Aq0N6j3ESys