In Housing My 3D Printing

I have been meaning to purchase a 3D printer for a while now. I have been holding back for a while to see how the various 3D Printers that are available to the consumer market are progressing in their development. And finally, I bit the bullet and acquired myself an Anycubic 3D Resin Printer. Here is what I have been up to over this past month. 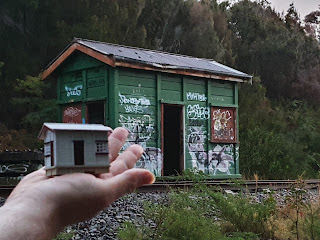 Justification In Getting My Own 3D Printer

Up until now, I have been sending off my 3D Drawings to Shapeways to produce the 3D Printouts. I have been satisfied with the 3D Printed products that Shapeways have produced for me. But the main challenges faced is the cost of the Print as well more to the fact that if the model looked good as a drawing, the printout may not have produced what I hoped for. For example, the 3D Drawing of Muttama Curtin for the waiting room entry looked good as a drawing but not as a 3D print. Which meant a corrected reprint at Shapeways was needed which came at a cost where the postage was going to cost way more than the print itself. Luckily, I was able to combine a Shapeways order with one of my model rail friends which reduced the postage cost in getting the corrected model posted to me. This is not the first time that this scenario has happened to me. Furthermore, the costs in getting 3D prints done through Shapeways have been much higher since I started 3D Printing Models a few years ago due to several factors such as, Shapeways increasing their overheads and not having special deals on a regular basis, GST being added onto imported goods and the AUD Dollar being weaker to the US Dollar. But the most expensive overhead is the postage. Hence, having a 3D Printer that can be used even to do test prints to see how they turn out and if  they have turned out well, then it would eliminate some unnecessary costs.

After seeing an Online Deal and taking into account that anything that has electrical components in them are said to be going to be up to 25% more expensive in the not too distant future due to component shortages, I decided to purchase the Anycubic Photon Mono X with the Wash and Cure Station Plus.

Resin 3D Printing is a new deal to me and thankfully I had a helpful source to guide me through the methods on how to print on a Resin Printer. I decided to print off my first 3D Print that a specifically drawn up to be printed on this particular 3D printer. First, print failed, not because of a bad print job, but the resin prints are brittle and were breaking up when I was removing them from the build plate. This issue was simply resolved by pouring hot water over the models on the build plate which have made the resin material flex a bit and with a hobby knife with a chisel type blade and a Stanley knife blade, I was able to remove the 3D prints without breaking them.

In my opinion, the Wash and Cure Station is a must as the 3D prints do need have a decent wash in order to clean off uncured resin residue and the model will also need to go through the curing process to fully cure the model. Also uncured resin can make a mess if not cleaned properly and it is highly advised to avoid skin contact. 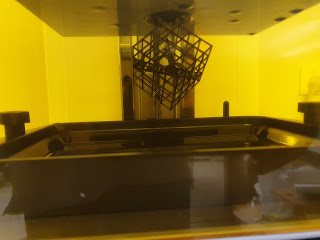 Doing the First test Print before my first print. 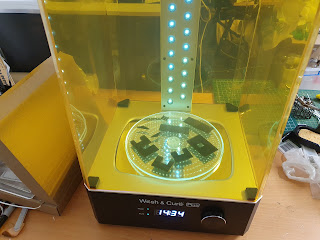 The Wash and Cure Plus Machine shown here doing its curing activities.

When waiting for the postage of the 3D Printer, in that time I decided to draw up in kit form the Precast Concrete Signal Box that remains at the Royal National Park. Not only it still exists in a derelict state, it was within my LGA so I was permitted to venture out there. Therefore I was able to determine and confirm measurements to make up this kit as close to prototypical. 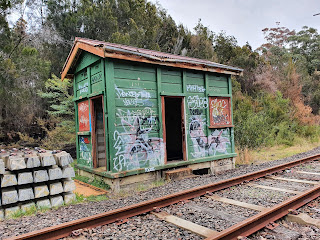 The Royal National Park Signal Box as it is today
Now for the Print and a partial test build. I used Super Glue to build this model from the printed material. As the print do not consume too much resin, I did do duplicate prints, one for a test build and the other to use for casting if the model worked out. 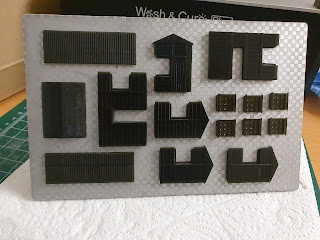 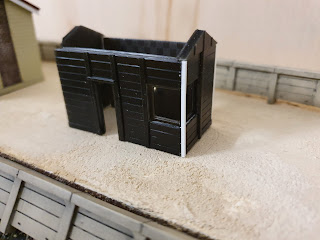 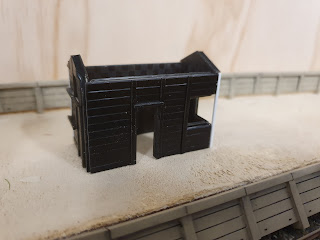 From the build plate to the simulated build

Prints turned out ok. I did need to make a few minor refinements to the model to make it work out. This Printer has saved me cost of prints and postage from Shapeways. Money saved can be used for making moulds to cast this model.

The final prints came out in ok state, meaning the non scenic parts of this model did not print out ideally to my expectations, but the sides of the model that had the detail turned perfectly well. Therefore I decided to bypass Shapeways and get straight into the making moulds to cast this model Kit. 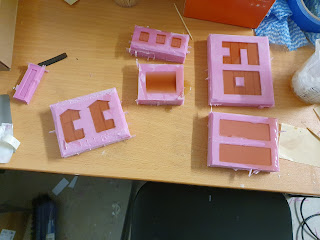 Moulds made and first lot of polyurethane resin has been poured in. 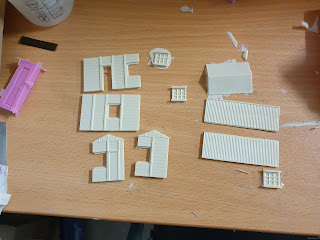 First run of the main body of the Signal Box and the roof castings done. 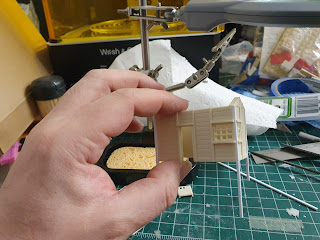 Using styrene strip to join the the corners up, this was glued up with Super Glue. 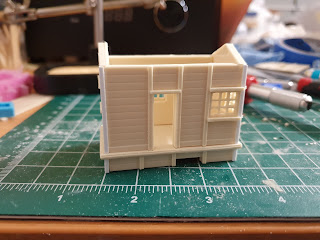 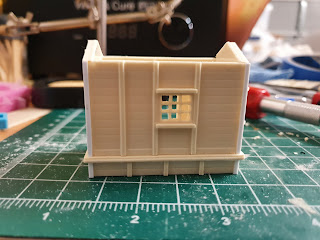 I eventually printed out and casted the base portion of the Signal box. Notice how the styrene strip threads through the base which is very helpful in lining up the base of the model. 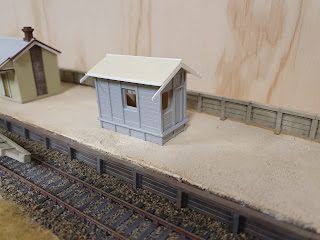 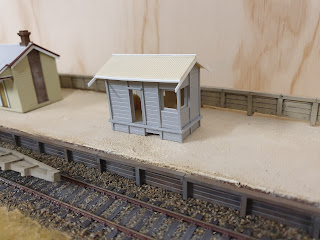 Primed up ready to be painted up, but still pending the roof section to be completed. 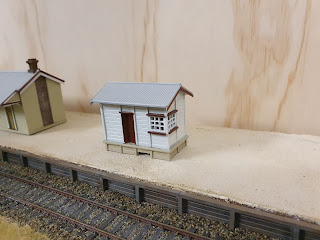 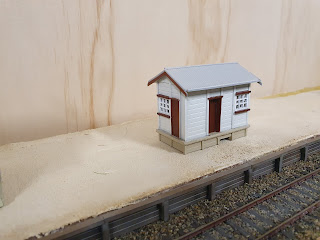 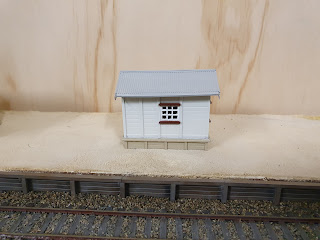 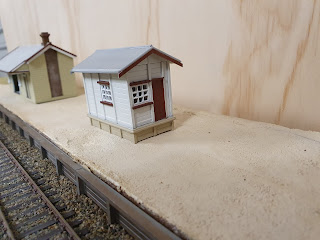 Model Painted and completed.
3D Printing via Resin Printer Versus Shapeways
As mentioned earlier, the key parts of this model that are visible have turned out extremely well via the 3D resin Printer and no effort was needed in cleaning up the detail was needed. In fact no print lines at all was a great outcome for this 3D project. However, resin printing I found do seems to warp a bit. This is an issue faced with seasoned users of 3D Resin Printers. I have found that the Resin Prints can bend flat into shape via heating them in hot water or a hair dryer and flattening out on the base with double sided sticky tape before casting them does work out well. Which it did in this case.
However, there will be occasions that the resin printer may not be able to deliver a satisfactory print but would prove that it would workout well via a Shapeways print. Lets face it, consumer based resin 3D printers are a fraction of the cost compared to the Shapeways 3D Printers and further to that point Shapeways is a professional 3D Printing Service (along with their competitors) and they do deliver a nice print with a sizeable range of 3D Printing materials available. If I was to go to Shapeways for this print as is, it would be indeed a costly exercise, but everything would be in near perfect form. Only criticism with a Shapeways print, is that you need to clean the model and do a bit of light sanding to remove the 3D printed lines.
Example of a Model that I have done in the past that made for a better model via Shapesways is my CC1 Precast Toilet block. Prints well via Shapeways but not so good via my Resin 3D Printer. But, at least it can be test printed via the Resin Printer to see if it good to go through as a Shapeways print.
At the time of writing up this blog, I did upload the various parts that was needed to make up the Royal National Park Signal Box via Shapeways. Quote via Shapeways would have cost me around the $250 AUD mark to print out which also included postage. To bring down the price, I would have needed to draw up a more completed building in fewer parts to try and reduce the price which I would guesstimate to reduce the cost from one third to half of the cost. Either way, the Royal Nation Park Signal Box Project has been cheap to printout and cast out as a polyurethane model and can be reproduced on demand at a very affordable price.
However, for example, my NSWGR CC1 Gents Toilets are best available via my Shapeways store to the scaled model solution. The good thing about Shapeways is that you can put your 3D Prints to market, which I have for my NSWGR CC1 Gents Toilets.
Here are the links to mine and Ray Pilgrims Signal Branch 3D Branch shop on Shapeways. The reason I mention this is that it is likely that Shapeways will have the Black Friday and Cyber Monday at the End of November. This may be a good time to get your prints done at a discounted price. It may be one of the very few sales that Shapeways has in the year for 3D Printing materials that are needed to print in fine detail in HO and N Scale. Maybe the best time where multiple purchases can be made under the one postage by other 3D modellers. Not so much my store, but Rays has a very comprehensive range of NSWGR Line side items and parts to enhance some of the NSWGR HO Scale Locomotives details which is worth looking at.
Ray Pilgrims Signal Branch
https://www.shapeways.com/shops/signalsbranch?li=pb
My Store
https://www.shapeways.com/shops/branching-out-rail-models?li=pb
As for other activities for the Month of September. I have done a little bit to my Stock Yard ramps for my Muttama Layout Project which I will give a more detailed update on in my next blog.
Until Then, Stay safe.