Return of The Model Rail Exhibitions

Model Rail Exhibitions in Sydney are back on after 2 years not being able to go ahead due to COVID.
Here is the details of the first event for the year. Furthermore, I will be exhibiting Narellan.
Forestville Model Railway Exhibition 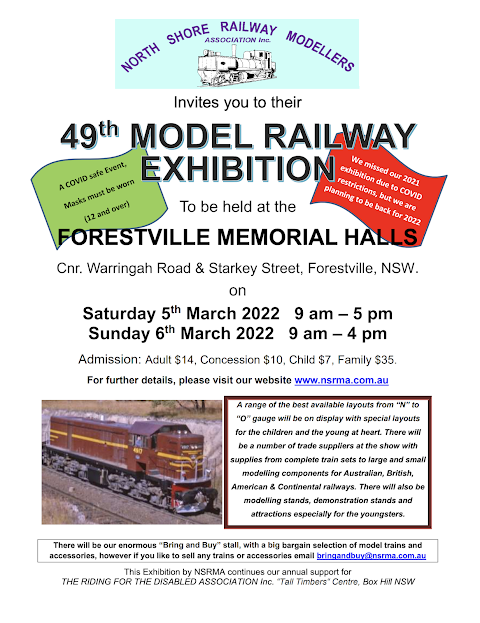 Narellan has been accepted to be exhibited at this Model Rail event. From the details that I see for this event, there are going to be some good stores and a good amount of very decent model rail layouts that are going to be on show. I would like to thank the North Shore Railway Modellers for the invite for this event.
My Model Rail efforts for February
I have been carrying out an extensive cleanup at home which has been taking up most of my time of late. However, over the last week, I have managed to get back into the routine in doing some railway modelling more focused in getting Narellan ready for the Forestville Exhibition. This meant that Jindalee had to be dismantled and stored elsewhere for the short term in order for me to get to Narellan which has been safely stored under the fold out table that my N Scale Layout of Jindalee has been based on.
At this stage weathering of my rolling stock for Narellan has been the main focus, starting on the portion of my S Trucks collections MLV Wagons and a CCA End Passenger Car. In the next few days, I should have a few more items of Rolling Stock and a few Locomotives weathered as well. I will go more details on how I carried out my weathering efforts in a future blog. All I have to say is that I'm happy with the results so far. 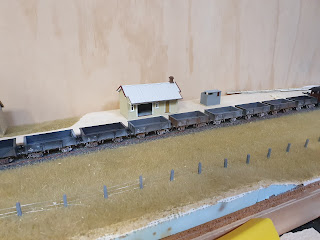 Number of S Trucks are weathered and are now looking the part of used and abused rolling stock. 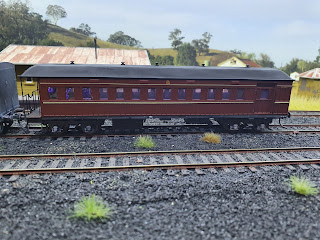 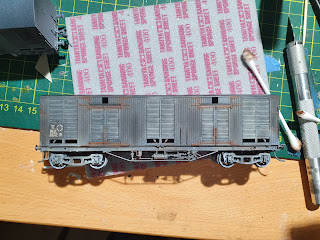 MLV Wagon weathering work almost in completed.
Also, After just on a year since I repaired and put Narellan into storage, over last weekend, I got Narellan set up. With only track clean up needed, plus a couple items of wiring done, I was able to get Narellan running in a perfect state. Narellan is now in a good operating state to be transported to Forestville. 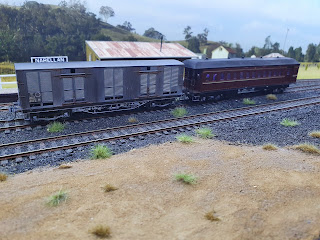 MLV and CCA End Passenger car posing in Narellan yard.
Well, certainly great to be back getting ready for an exhibition. Provided that we do not get rained in or catch COVID, hopefully we will see you at this weekends exhibition at Forestville.
at February 28, 2022