June progress may present itself that is has been slow moving, but a lot of progress has been done in the way of getting the Track Work ready to be finally fixed to the layout, as well as getting the electronics completed for the layout. Also, I feel that it is now the time to also announce the location of the Layout that I am modelling.

Track Laid Down and All Wired Up
I managed to finally get the Track set into position and wired up so that testing of the track work and the Magnetic uncouplers can be carried out. Certainly a few minor issues were found but fortunately nothing too difficult to resolve. I spent a good few days running various locomotives and rolling stock to ensure that they run effectively without any issues. 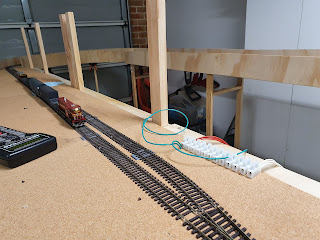 Testing out of the track work and the Electronics before making the wiring permanent.

Issues That Got Discovered and the Remediations
Track Work - No issues found. This is most likely due to a simple track plan.

Electronics - Only issue found was a scenario of a slight disconnect from one of track connections from one of my scenic modules to the connecting run around module. This issue was easily resolved by replacing the fishplate on the kato track connection. I was looking to avoid installing any wiring on the Left side Scenic module, however a wiring connection between the Left Side to Right Side Scenic Module will help in reducing the risk in that scenario to happen again. By doing this, it will maintain a separate bus path if a break in the connection within the track work was to occur.

Magnetic Uncouplers - The Magnetic uncouplers have been working to my expectation, but I have found with the knuckle couplers from different models of locomotives and rolling stock are not the same. Some work well with the Magnetic couplers and others don't. This is a new experience for me, but I found when testing out kadee Couplers that came already fitted with the Casula Hobbies HG Vans had the best results that I was looking for. I have been also engaged in talks with a couple of other of my model rail friends who have recommended certain types of Kadee couplers for magnetic uncoupling. Looks like converting the knuckle couplers on the locomotives and rolling stock that will be dedicated for this layout will need to now to be an added task for this project. 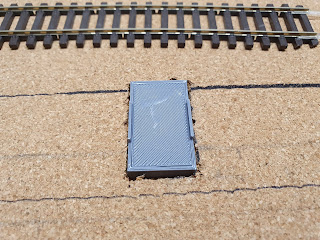 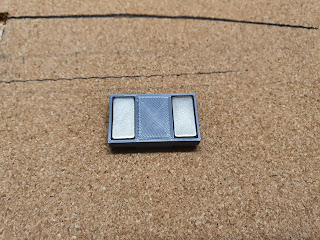 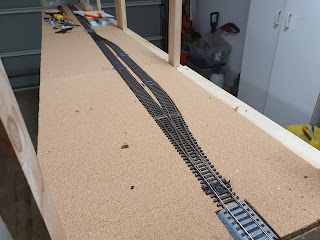 DCC Concepts ADS-2sx Solenoid Accessory Decoder Installation
I have decided to continue my faith with the DCC Concepts ADS Solenoid Decoder as I have found they worked exceptionally well on my Narellan Exhibition Layout. I was fortunate enough to purchase this Solenoid Accessory decoder when the latest batch was put to market recently. It is worth noting that in this latest batch DCC Concepts have introduced a 4 output unit version. Not long after acquiring my ADS-2sx, all versions of this unit have been sold out. I guess that DCC concepts will be pushing for another batch of these ADS unit from their manufactures in the near future. These ADS units do offer flexibility between DC and DCC power options. 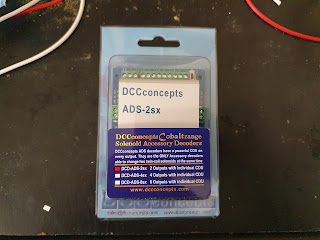 In the case for this Project, there are only two points that I will need to throw, therefore only need to install one ADS-2sx.

Setting In the Kato Track
The lengths of Kato Track that has been used on this layout is to allow connection between the modules and track on my run around solution back to the Fiddle Yard. Unlike my Narellan Layout, I have decided to use Kato track to link up both of the Scenic Modules. I have used Liquid Nails to fix in the Kato Track. Hopefully this will be a solid solution when connecting both of the Scenic modules together. 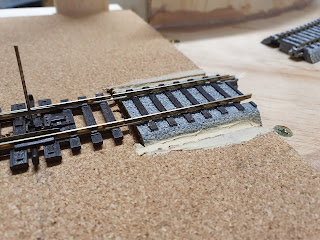 It is worth noting that I have replaced the code83 track with Peco code75. There is a process involved in doing this which is worthy of its own blog.

Getting the Track Ready For Ballasting
Before the Ballasting gets put in place, the weathering of the sleepers and track will need to be carried out. In this instance I decided to use a light spray of Tamyia Hull Red and Neutral Grey.
At this point of time I have not yet painted the edge of the rails painted, but more on that will be covered in my July update. 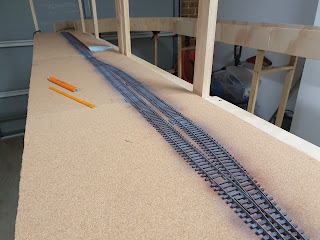 Weathering applied to the track work

Naming of the New HO Scale Exhibition Layout
Ok, I have left many of you in suspense for a while now on what location that I am modelling here. First of all, Narellan is a nostalgic layout of well known location that was very unique in its own right. The location that Im modelling here is not as nostalgic but is certainly very unique. This is a location based on a well known branch line which have not received as much of the lime light compared to the other stations that resided along the Cootamundra to Tumut Branch line. Not too many photographs of this station have been found, but the few that I could find were excellent shots. What lacked in photographic evidence was made up by plans of the station building, goods shed, Gatekeepers Cottage and a track plan which were mostly obtained from the NSW ARHS Resource Center.

The Location that I am modelling here is called Muttama, which is very unique to the fact that it is a very early days station building that is believed to have remained in place until the time the line closed. The Goods Shed that was constructed was also very unique to the fact it had a rounded roof and a very different type of goods shed configuration compared to other goods sheds that were constructed elsewhere on the NSWGR network.

Muttama was the second station heading south from Cootamundra to Tumut and seems to have serviced a small population. Muttama consisted of a small loop siding for the goods shed and stock yard.

My objective in building this layout is not just to get the recognition that Muttama deserves on this popular Branch Line, but hoping to demonstrate to those who have ambitions in following this hobby that you do not need a complex track plan for a decent layout.

Here is the link on the NSWRail.net website that contains the few rare shots of Muttama Railway station.
https://nswrail.net/locations/show.php?name=NSW:Muttama&line=NSW:tumut:0

Well that is my June update completed. Finally, my Shapeways order for the 3D Prints needed for my Muttama Project has just arrived the other day. This will now allow me to start the construction on all of the line side buildings. More on this on my upcoming July 2020 update. 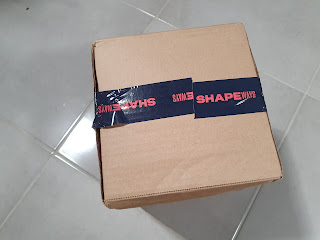