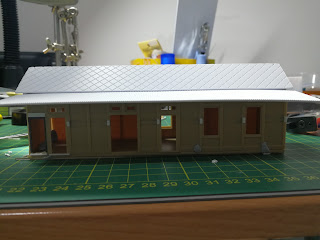 This post is mainly focused on modifications that are done to the base of the Station Building plus a little more on the minor detailing that has been added. But before I move onto that topic of the base, I just wanted to show that I did a cut out of the area of the corrugated styrene that was needed for the awning.


Base of the Station Building Modifications 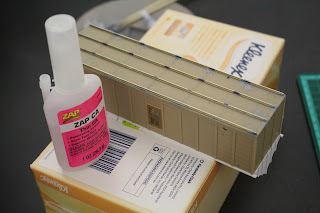 With the first part of the modification, I have kind of followed the directions that are detailed in the Australian Journal of Railway Modelling Number 11, where code 55 track was used to model the rail line that was utilised as a bearer on the base of the building together with an array of concrete stilts. The kit does come with a supply of the concrete stilts that are designed with a tongue that lines up with the the square slots on the base of the building.

I did use these few words kind of followed in my last paragraph and now for me to explain where I was heading with that point.

In the Australian Journal of Railway Modelling Number 11, it modifies a Rail Central Pc3 Station Building Kit into a Pc2. It points out in the article that the 15" Panel Pc Buildings had the rail inverted on the base of the building (as in my picture above) where as the later Versions of the 10" Panels had the Rails rested on their side between the stilts and the base. That same article showed photographic examples of Conoble Pc2 (10" Panel) station that clearly show the Rails rested on their side.

As Tumbarumba Station Building was an early version of the 15" Panel Pc Building, I used the inverted rail method with Micro Engineering Code 55 Track. 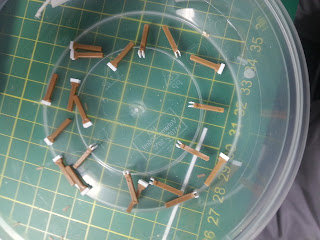 With the concrete stilts, I removed the tongues with a hobby knife and cleaned up the cut with a file. I then I cut up a strip of styrene to make up the extended length that is needed to cover the area of the rail. I trimmed the excess styrene on the concrete stilts with Xuron Track Cutters which help lined up the styrene with the remainder of the concrete stilt. This was repeated many times. 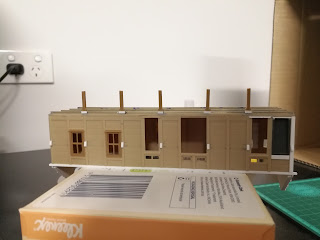 Back to one of my earlier points in regards to filing the edge of the rail to the area where the concrete stilts are being placed. The reason for this is that the base of the rail is just too wide to allow for the modified stilts to be placed over the rail. Basically without the modification to the rail the styrene portion of the concrete stilt will spread out. When the rail gets filed, it allows for a good fit which also allows for the concrete stilt to be glued onto the model without the stilt looking crooked or distorted. It was fortunate for me that I tired this out before gluing the rail line onto the kit as it would have been a messy task to have resolve that issue.

The stilts were glued onto the Station Building Model by use of a Shellys Araldite. 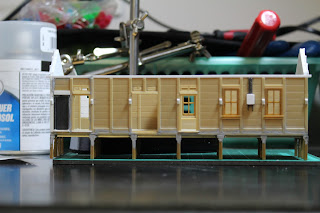 After gluing on all of the stilts, I used Tamiya Putty to fill in the gaps around the base of the model. Does look a bit rough, but fortunate in a way that the Station seat and the platform will cover some of that up. Still will need to do a bit of cleanup work before painting this model.

Minor Detailing Work
You may have also noticed in the above progress photo, I have placed in an electricity meter box between the windows of the Station Building. This was constructed with a a bit of wiring to represent the electrical wiring and the Meter Box was made from a rectangle styrene tube with a bit of styrene sheeting cut to size to make up the hood. 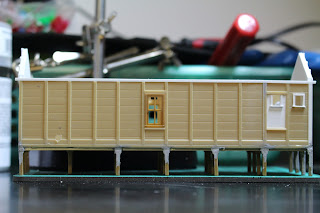 Around to the back of the Station Building. I have done the window framing of the Extended portion of the Station Building. Also take notice of the area where the second last panel section to the left of the building that there is a stilt missing and a hole drilled into the side of the building. This is to allow for a Fireplace with a 3 mm Flickering LED and a Chimney to be installed.

Tumbarumba was one of a few PreCast Station Buildings that was provided with a fireplace. Batlow and Oberon Pc3 Buildings were the others that had a fireplace installed.

One further item to note that from the photos that I have seen of Tumbarumba, it seems not to have the corner bracing on the stilts (bracing was also mentioned in Australian Journal of Railway Modelling Number 11). Though, I have only seen the later photos of the back of Tumbarumba Station Building in its final few years of existence, so therefore can not see the need to place them onto this model. Meaning that I have not been able to confirm if the bracing was ever fitted.

To close this post off, another reflection of hindsight is needed. From this experience, I would recommend that the stilts should be one of the last item to be done if you are going to kitbash a Rail Central Pc Building. I guess the same applies to other building projects that contain stilts at the base. The reason for this, I accidentally broke some of stilts off whilst doing other modifications to this kit. The main offenders are the corner stilts. Hopefully, this issue will be resolved once this Station Building is finally fixed to the layout.