Tumbarumba had outside seating that was fixed to the Station Building. This seating arrangement seemed to have been unique to Tumbarumba, but have fit the design to what was used within the Shelter Shed portion of the Pc Building.

Please excuse my ignorance on the terminology of the various components that make up this type of seating, but will do my best to describe each item. I believe that similar types of seating are used in Churches which are called Pews, but not sure if the railways adopted the same terminology. However, more than happy to be educated on that point. 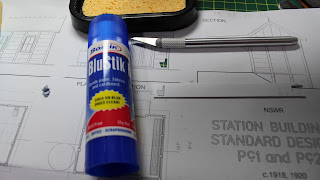 On the Greg Edwards Data Sheet for Station Buildings Standard Designs Pc1 and Pc2 (Data Sheet B27),  it contains the outlining of the seating frame. I photocopied that portion of the Data Sheet and carefully cut the profile. By use of Blu Stick glue (or a glue stick that is used to stick paper to cardboard), I glued on the cutout to a strip of styrene. Then cut around the outlining of the seating frame, then cleaned it up with a file. 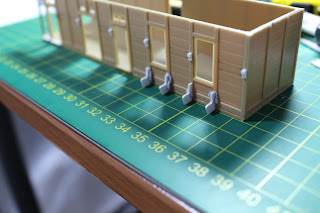 This process got repeated a few times as four of the of these seating frames were needed. I also placed each of the seat frames side by side, clamped them together so I could file them to be consistent to one another. 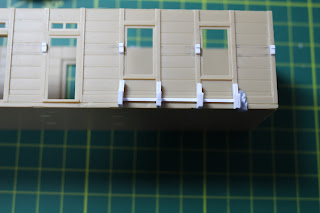 From the photos that I have seen of the seat at Tumbarumba, it had length of timber which I assume would have been used for the bracing. I have modelled this out of a strip of styrene to reflect this bracing. Note that the seat frames were attached to the vertical Precast Concrete Posts. 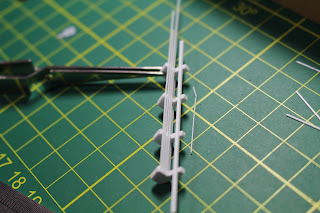 Once the bracing and the seating supports were glued up, the remainder of the seat detailing was carried out. 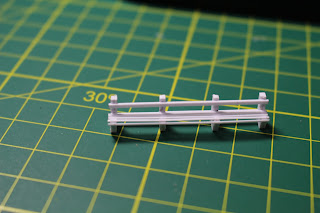 I made use of the Xuron track cutters to trim off the excess lengths from the styrene strips that were glued onto the model of this seat. I found that the Track cutters did provide a nice clean cut. 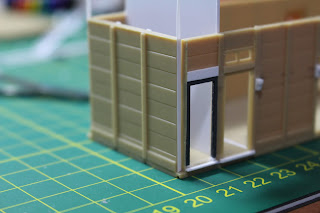 I had to manufactured the door steps for both of the doors from the extended part of this Pc2 Kit. This was again done with styrene strip which I rounded off the edges with the file.

Before moving into the next topic, take note of the fine strip of Styrene that was added to the edges of the end wall. This was put in place in order to allow for alignment with the other Precast Concrete posts on this building. 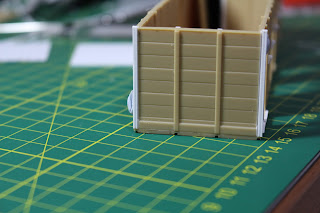 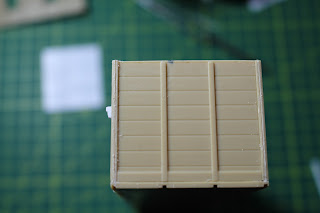 Here is a moment of hindsight where I should of removed all of the Corner Precast Concrete post on this kit and applied the same modification of what was done at the other end of the building. However, I scribed in a line to represent the slot.

Interior Walls
Reason that I would like to detail the interior walls is that I do want to open up some of the doors once this Building gets completed and placed onto the layout. I'm also going to later on place in some lighting which will show some of the detailing inside the building. If the doors were going to be locked and no lighting placed in this building, then I would have not have carried out this modification. 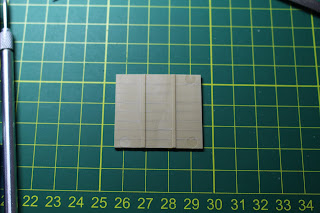 The Pc2 Rail Central Kits is supplied with only one internal wall which only contains detailing on one side. Therefore I have scribed the lines to represent the 15 inch concrete panels. The circles that are seen on the non detailed side of the model should not be an issue as there will be obstructed with other items placed in front of them. The supplied internal wall would be normally placed between the Shelter Shed and the office with the detailed side facing the Shelter Shed. 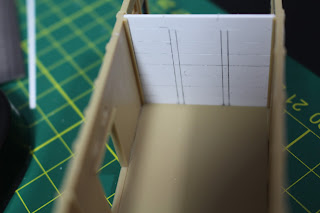 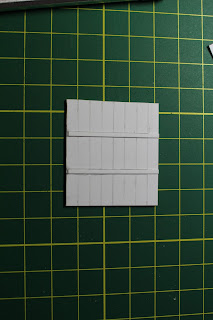 I manufactured another precast internal wall all out of styrene which will be placed between the Shelter Shed and extended toilet sections of this building. Detailing of the Precast 15 inch panels were scribed in. 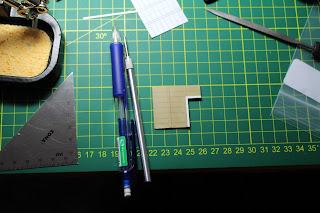 I utilised the internal wall from the Second Pc2 Kit where it is going to be placed between the Office and the Living Room. I have modified it to have a door and also scribed the lines to represent the 15 inch panels. I have also placed in a door frame made from Styrene strips.

Roof Section
Form my last Blog post, I focused mainly on the roof section modifications that were needed to be carried out to get the high pitched roof version of a Pc Building. This part is a continuation of the roof modifications. 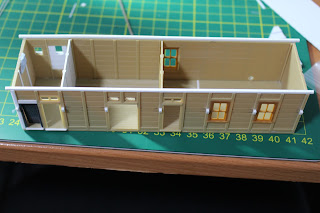 As mentioned in Tumbarumba Station Building Kit Bash Part 3, the top narrow row of panels were needed to be removed. Here I have replaced that row with the with 1.5 mm x 1.5 mm styrene strip which now better represents the lower Beams of the roof that the rafters would have adjoined too. 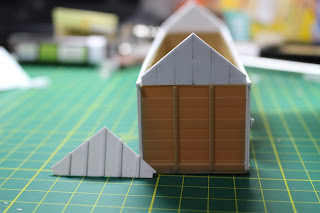 As you may noticed that I have attempted to utilise the one gable for the detailing of the vertical strips, but the results did not look good at all. So I manufactured a another separate gable with a thin sheet of styrene. 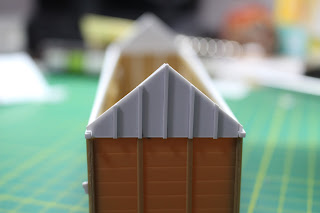 This resulted in a better look for the model as the Gable sheet overlapped were the cut was made to remove the original Gable, also making it look more prototypical. 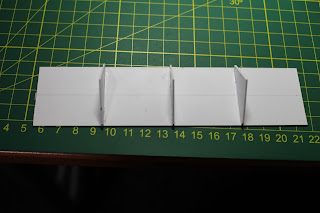 With the gables and the lower beam for the rafters now sorted, I was able to get the dimension that were needed to make the ceiling as well as the support for the roof.