Just would like to start off this Blog on a bit of insight on Tumbarumba Railway Station Building.
After doing some research, I found out that Tumbarumba Station Building was a Precast Concreate Pc2+.
The plus meant it was constructed as an extended version of the Pc2 NSWGR standard, which in this case provisioned for a Ladies Waiting Room.
After the Mid 1960’s, the Ladies Waiting Room was renovated to create 2 x toilet rooms. This will be version that I will be modelling. Therefore, to make this project prototypical, a kit bash will need to be done.

Before going into the details on the Tumbarumba Rail Central kit bash, there are a couple of other Rail Central Kit bashing articles which are found in the Australian Journal of Railway Modelling Number 11 and Brian Ayling internet site http://users.tpg.com.au/bdayling/Pc2_Conoble.html.
The following summary is what I have determined that is needed to achieve a prototypical model of Tumbarumba Station Building:
-        2 x Pc2 Rail Central Kit.
-        Add in Fan Lights above the Shelter Room entry door.
-        Lower the Corbels.
-        Remove existing gable and replace with a higher pitched gable.
-        Replace corrugated roofing with a shale tiled roof with roof capping and Finnels.
-        Replace the Awning.
-        Add a Brick Chimney at the rear of building (where the living room area is).
-        Place 4 x rows of code 55 HO scale rail track where they need to rest on the concrete stilts.
-        Plus a few more items of minor detailing.

Before cutting up any of the Pc2 Kits, I felt that a test build on the front an rear of the station was needed so to help identify any potential issues. I did this by photocopying the panels of the model and do the paper test build. 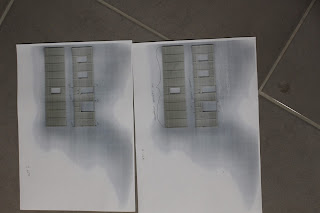 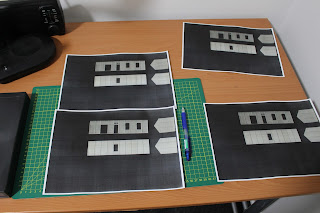 The first test build was done and found a few slight errors that I was able to easily address.
The second test build attempt worked out well and this determined that the time was right to start cutting up the Pc2 Kits. 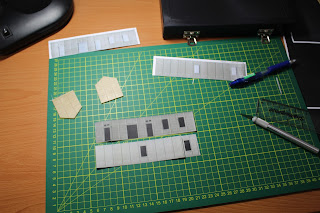 Second Test Build
Start of the Kit Bashing
First Part of the Kit Bashing was to cut up one of the Pc2 Kits so build up the extension that Tumbarumba Station had.
I made use of an Excel razor saw and a mitre box to make the first cut. I was very happy with the clean cut that this saw has made. This provided me with the confidence to keep cutting away. 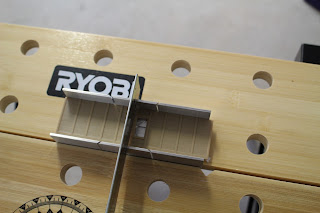 The first cut on the Second Pc2 Kit 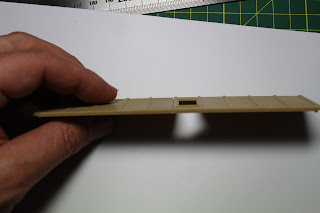 Going back to the First Pc2 Kit, there no cutting up of this kit needed other than to carve out the Fan Lights above the Shelter Room entry door.

I was able to achieve this by making use of a Pinvise Drill, a narrow chisel type Hobby Knife. I found a hobby file that was narrow enough to clean up the cut. 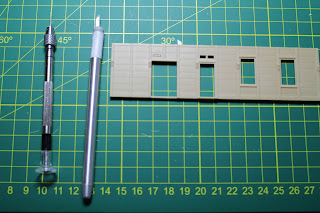 Drilled several holes with the Pinvise. Then used the hobby knife to carve out the Fan Lights.

Very happy with the results so far. We will see later if this was just beginners luck.

Finally, I would just like to summarize my learning's from this in the hope that it will help someone out who wants to do a kit bash project like this.
-        Photocopy the kits that you intent to kit bash by use of black sheet of paper/card board (or white background for a model that it black), as this will provide a higher detail image. My first attempt was with a white background caused it to blur up some of the image, which caused some of my errors in the first Test Build attempt.
-        Take your time, don’t rush.
-        Talk to other modelers, seek their advice and follow their suggestions.
-        For any Pc Kit bash project, make use of Greg Edwards Station Buildings Standard Design Plans B27 and B28 as they are great point of reference.
-        Australian Journal of Railway Modelling Number 7 has a good article on NSWGR Pc Buildings. I have seen Number 7 and 11 still on sale at Model Rail Exhibitions.

Next blog will continue with the construction of Tumbarumba Pc2+ Station Building.
at November 07, 2017