Applying A Back Scene On Your Layout

From my previous blog, I mentioned that I replaced the Haskell Back scene due to its lost of adhesion on the back scene board. I do want to make it clear that it is not an issue with the Haskell Product, but on what needs to be done first before applying your back scene picture regardless if it is a Haskell Product or other adhesive Back Drop picture product.

This is a blog from my learning from experience on applying a Back Scene, the problem I encountered and the solution. I simply want share this so that others can get it right at the first attempt.

I found that I and other Model Rail Friends of mine have experienced the issue of self adhesive back scenes basically bubbling up after a hot day and loosing its adhesion on the back scene board. However, the problem that causes this has been worked out and the following is what I have done to overcome this issue.

The Problem started when applying an enamel gloss paint that was in the paint to clear bin at a cheap price at Bunnings Warehouse (basically paint that was mixed behind the counter). The gloss in component in this paint would aid the adhesion when applying the back scene to the back scene board, but in this case it seems that this pot of paint may not had the needed volume of gloss mixed into the paint to make it work for this purpose. Before placing the back scene on the back scene boards, I did apply some spray on adhesive with the thought that it would help fully secure the Back Scene on the Back Scene Boards. All was good once it got applied and then installed into the layout.

Then one day there was a hot day that made the Back Scene bubble up and started to detach itself from the back scene board. 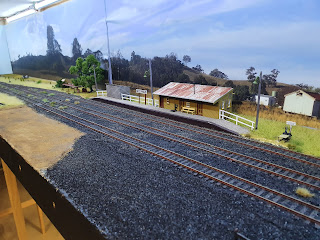 My back scene before the replacement work was carried out.

I consulted with other model rail friends of mine who advised me they had faced the same issue.

As suggested to me, I was able to fix some of the issue up with putting the layout out in the sun for a sort time which did fix the issue for one of the modules but the other module seem not to have responded well. After hearing of the solution that works, I decided to acquire another back scene and start over, this time providing some step by step directions to apply the back scene successfully.

Note, This following task was done on a Sunny 27 Degree Day during January (Middle of a Sydney Summer).

It is recommended that this task gets done on a warm sunny day as you will find out the reason why a later on.

First of all, get a tin of Enamel Gloss Paint, in this example I have used a Black Gloss Enamel Paint. Safest bet is one that has been premixed by the Manufacture ready to use. 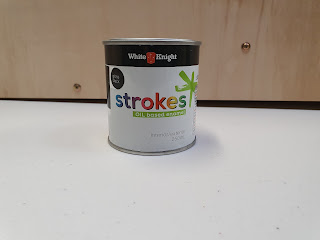 Tin of Black Gloss Paint that I will be using to apply the Back Scene Boards.

Apply the Enamel Paint paint on the Back Scene Boards. 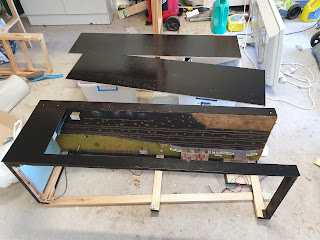 Back Scene Boards painted, also painted the front facias of my Narellan Layout

When the paint is touch dry, set up the Scene Boards and line up the Back Scene picture to the Boards. In my attempt here, I cut up the back scene where the two modules meet up. This did make easer for me to apply the back scene later on. 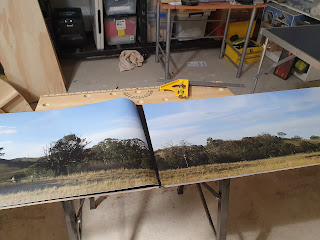 Once lined up, I suggest that you start on the ends where the two modules are meeting up to ensure that that they properly line up and take your time applying the Back Scene Pictures on each module Back Scene Boards. 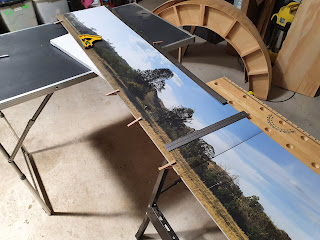 Lined up the back scene pictures with the back scene board and secure the final desired placement with pegs and other objects that have a reasonable weigh to prevent movement of the back scene when the initial stages of applying it to the boards is carried out. 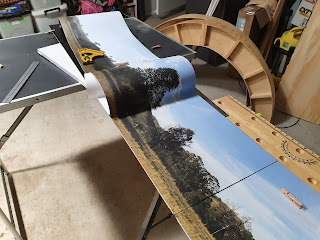 At this point remove all of the pegs after the first quarter portion of the back scene has been applied. The rest of it should be easily placed square on the board from here on in. 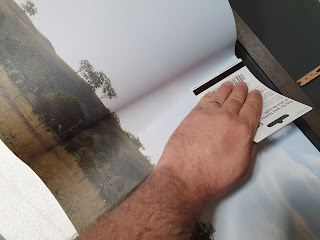 Once applied you will already notice some air bubbles starting to form.

To solve this problem take the module outside exposed to the sun. It only took a minute for the back scene picture to bubble up. Don't panic, this is a good thing as the heat from the sun seems to reactive the adhesive in the Back Scene Picture. 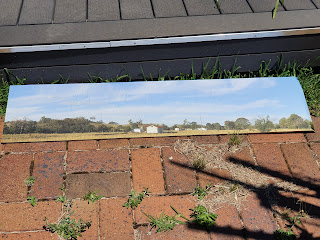 Bubbling effect started within a minute in exposing it to the sun.

From here, you get a firm enough but flexible card (again with spent Netflix Card) and smooth out the bubbles. Please note, that the Haskell back drop pictures are robust due to a highly protective covering and you will not cause any damage to the picture. 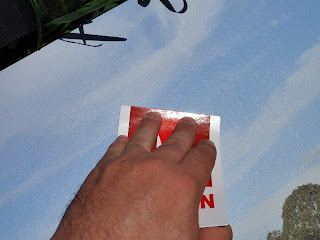 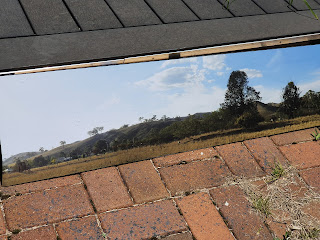 Back scene looking well set in the back scene board.

You will find that there are some bubbles that will be stubborn and will not go down by pushing down on them. To solve this, I uses the point of my hobby knife to create a small hole which released the from the bubble. The good thing is not only you remove the bubble, the small cut you make to remove the bubble disappears as well. 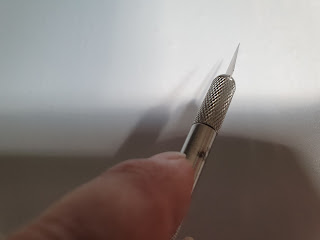 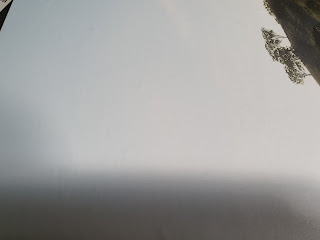 Unfortunately, I did not photograph a good example of one of those stubborn bubbles, but photographed the sky portion of the picture which did not pick up too well. But, there was a bubble there, used the point of a hobby knife to remove the air that was trapped. No evidence of the slight cut in the area where the bubble was removed.

Remove from exposure from the sun and place the Back Scene Boards in a cool area.

Back Scene Boards are ready to be installed on the layout back onto the layout. 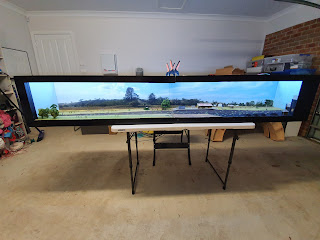 To Sum It All Up

I have also been advised by others that this can be done with a hair dryer or heat gun, but I personally like the sun method on the basis that it does consistently heat up the back scene.

After good Month in the Garage where there has been few hot days, the Back Scene picture has managed to stay stuck on the back scene board without bubbling up or detaching itself from the back.

I hope this helps others out in applying a back scene for their layouts.

Next blog will be hopefully ready in the next couple of weeks. All I will say is that there is going to be something exciting to look forward to.