I would like to firstly wish everyone a Happy New Year for 2020. Unfortunately, it has not been a good end to 2019 and a good start at 2020 for many of those who reside in the areas throughout Australia where Bushfires have impacted many homes and communities over the last few weeks. It has just so happened that one of the impacted towns was Wingello, which myself and a few other fellow railway modellers from my club where involved with in the construction of Wingello Exhibition Layout made several visits over the past couple of years to Wingello to collect the data that we needed to build this layout. My thoughts are with those that have been impacted and I hope those that are impacted can rebuild their homes soon. I have been informed that the Railway Station and the Village store in Wingello has survived this recent Bushfire.

2019 Achievements
Reflecting back in 2019, along with my other model club members we were able to get my model Rail Clubs HO Exhibition Layout of Wingello completed for the Epping Model Rail Club Exhibition which was held out at Rosehill Race Course. Wingello has certainly received some great feedback and has generated some expressions of interests for it to be exhibited out to other model rail exhibitions in 2020. 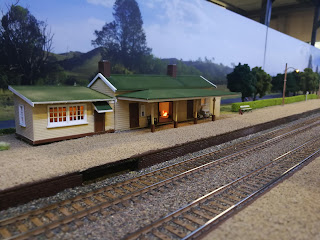 Wingello at the Rosehill Show

Narellan was another success for me in 2019, currently it is at its very near completion mark, I have been impressed with myself and with my efforts as this will become my first ever working layout that I have completed on my own. Certainly there were some challenges met in the construction of Narellan, overall I was able to overcome them all and hopeful of the end result of not only producing a Exhibition Layout that attracts the attention of the general public at exhibition events, but inspire those who want to go into the Hobby of Railway Modelling that you do not need to have a massive layout for the enjoyment of running trains.

Im glad to have taken up Narellan as a project, as it has taught me a lot of good practices on how a layout should be constructed which I will apply on upcoming future projects.

To close out Narellan, I would like to Thank the Organisers of the Modelling the Railways of NSW Convention to have Narellan on show at the convention and I would also like to thank those who have assisted me at the NSW ARHS Resource Center in finding the research materials that I needed for reference so I could model Narellan as close to what it was in the time that it was in existence. I  also would thank those who have mentored me in constructing this Layout. 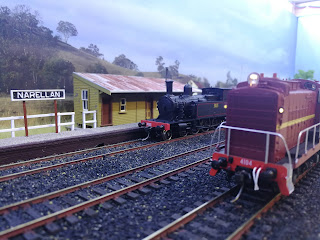 For my Tumbarumba home layout project, that has taken a bit of a back seat mainly due to the Wingello and Narellan projects. But I was able to get Glenroy Pc1 station Building completed. Throughout the year. 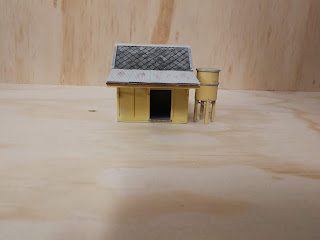 What Expect in 2020
I have had a good read on my New Year blog of 2019 and I see that I have completed all most goals that I have set for myself. I did not get any N scale Layout projects started. Even though I did manage to complete some N scale Carriage Kits. This was mainly due to the second part of 2019 for me were hit with multiple challenges with work commitments, other personal commitments and other unexpected life challenges. This has set what my expectation should be for 2020 which is as follows.

Narellan
To complete Narellan layout in January, with weathering of Locomotives and rolling stock and DCC installations to be carried out into February.

I plan to also get some rolling stock kits built up, painted and weathered. Once these items have been completed, I will have most of the Locomotives and Rolling Stock with the exemption of the 20 Class Locomotive that ran on the Campbeltown to Camden Branch line.

The main focus for Narellan will be to get it to a few exhibitions this year, which I will announce closer to the time of each event. 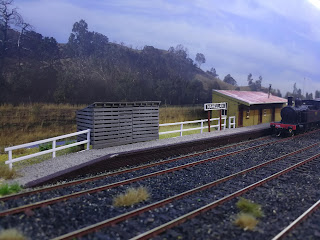 Next blog will show more in the scenery Narellan that what you see now.

Tumbarumba
I have now justified to myself that my Home layout of Tumbarumba will be best based within the Garage. Due to the fact that I intend to construct a couple of other Layout Projects, I do not see this layout been completed within the next few years as where I intend to place the layout will take up the area space that I use as a work bench. Therefore a bit of altering of the current Garage outlay will be needed. However, I do intend to get a few more line side structures built up so when the time comes to build Tumbarumba, the line side buildings are ready to be placed onto the layout. Once I replan the new outlay of Tumbarumba, then I will start setting some goals in building Tumbarumba in stages. Basically the plan in the Garage may allow for Rosewood to be also included. Start of construction work on Tumbarumba Layout may not be likely for 2020 but possible for 2021.

N Scale Layout Projects
If I had of finished Narellan a few months ago, I would have started on one of my planned scale layouts as originally planned in my 2019 New Year Blog. The first one I intend to construct is a simple Victorian Layout on the location of Boolarra. This layout is expected to be no larger than 1.8 Meters long and will be built to be both easily stored and be able to be easily transported. The intention for Boolarra is to travel with two other similar sized Victorian N scale layouts that my other Model Rail Club Friends have constructed for exhibition events.
Boolarra will be DCC layout.

There is also plans for another N Scale NSWGR layout which will be DC only still on the list. But when this layout project will start is yet to be worked out.

Other Projects
There may be a few other projects announced throughout this year. With Tumbarumba going to be planned to be placed in the Garage, there is space in the Train Room to have a different Layout/s installed in it. I have an idea what I would like to do, but I will build something that will better suit the available space. But will need to see if it is feasible to do or not.
I also want to get the rolling stock kits that I have acquired over the last few years built up and completed this year.

Blog Post Frequency Expectations
I will try to get at least one blog post in at least once a month.

Well, time for me to get working on whats left on Narellan so I can get it completed for my next upcoming blog. Here are a couple of pictures on what to look forward too. 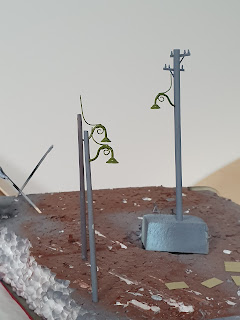 Platform lighting in a work in progress state. 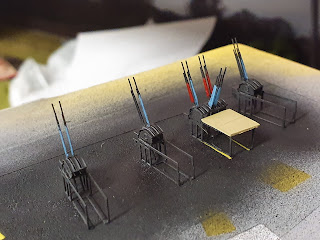 The Ground Throws and Signal Block that are currently work in progress (with one Ground Throw in need of correction) to be eventually added to Narellan. More details on these and other items on my next post.