Since my last blog update, steady progress has been made on the Coal stage, Office Hut and the Out House. I was hoping to get all of these line side structures completed and weathered before posting this blog, but felt that it would be best to leave that to another blog as I did come across an issue with one of my weathering tasks, therefore I will need to carry out a little more research and experimentation on.

Coal Stage
Corrugated Iron sheeting has been added to the model plus the cross bracing detailing on the front of the Coal Stage. This model has also been painted with a bit of a weathered look effect applied. Still a little more weathering to be applied, but intend to do this once the model is ready to be permanently fixed to the layout. So far happy with outcome of this model. 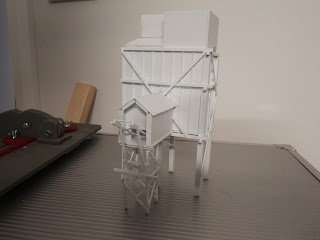 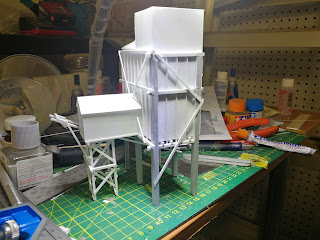 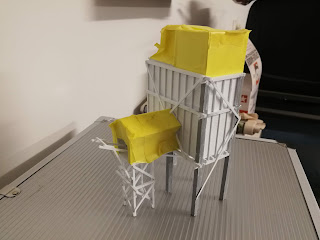 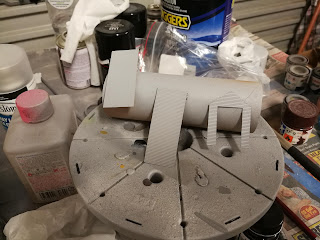 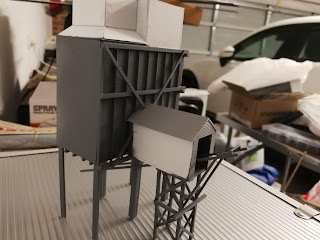 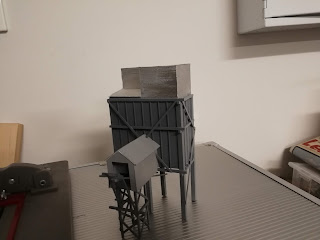 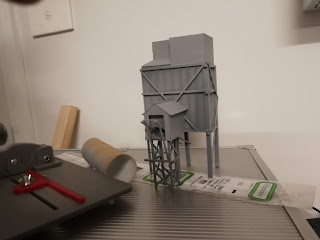 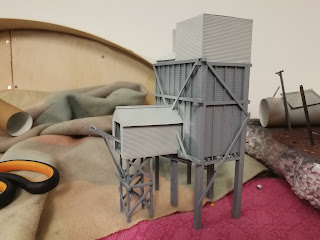 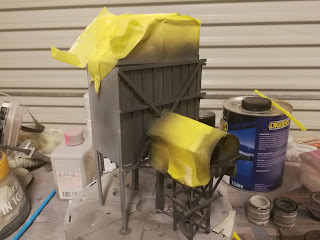 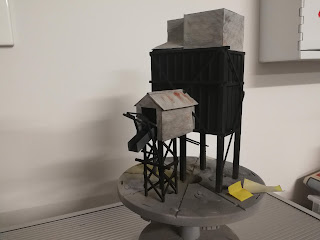 Office Hut for the Coal Stage
All that was really left to do with the Office Hut was to paint it, weathering it and glaze the window.
I could not find any photos that that clearly show what the colour was of this structure, mainly due to the fact it would have been overshadowed by the Coal Stage.

One thing that could be worked out is that the Office Hut seemed to not have been as badly weathered as compared to the Main Station Building and the Lamp Shed. This is probably because it may have been protected by the neighbouring Coal Stage, but certainly seemed to have received a good covering of Coal dust. 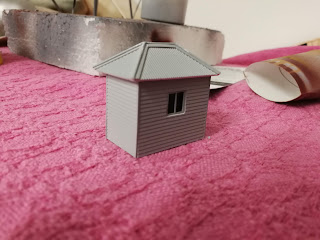 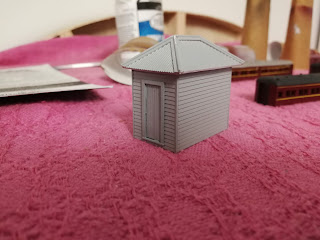 I decided to Paint the Office Hut in Humbrol Mid Stone (Colour Code 225), which is the same colour as what I painted Main Station Building and the Lamp Shed. 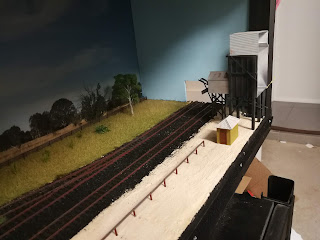 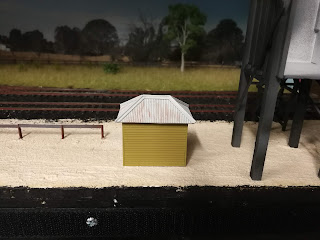 But then, I got way overboard with the weathering of the Office hut. In fact replicated the effect that I achieved with the awing of my Glenroy Pc1 Station Building where there was a nice blistering paint effect. Even though it was something that was perfect outcome for Glenroy ended up something that I did not want for the Office building. Basically, this was caused by too much paint thinners within the black paint I used to apply a black wash which in turn caused the paint job to blister.

Thankfully, not too much effort will be needed to repaint the Office Hut, but will be doing some experimenting on other weathering methods to get the coal dust effect right for this model which will also need to be further apply to the coal stage. 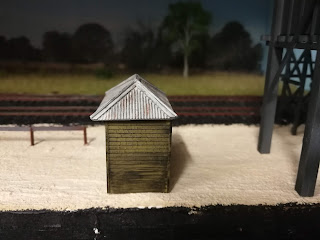 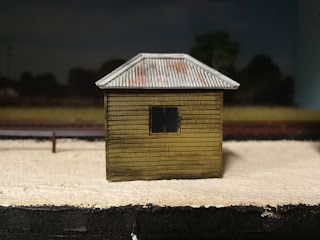 Paint blistering effect caused by too much paint thinners 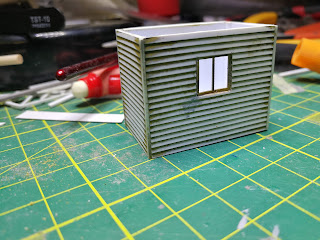 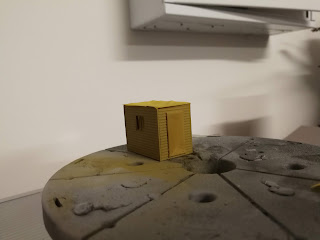 Paint job stripped back and the painting process stating from scratch


Out House
As mentioned in my last blog the few pictures of the Out House showed that it was surrounded by some thick landscaping that almost blocked it from full view. This is good as I was not fully satisfied of the outcome of the paint job, more so on the under coat colouring where I feel I could have added more grey colour to it. I have applied the rock salt weathering method before applying the top coat. I have used again the Humbrol Mid Stone 225 as the top coat colour. 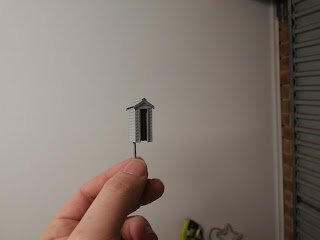 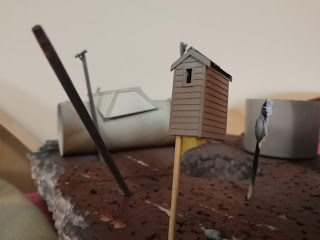 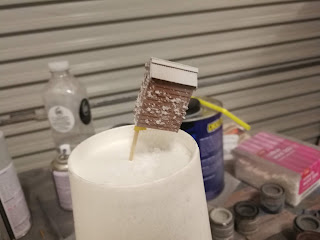 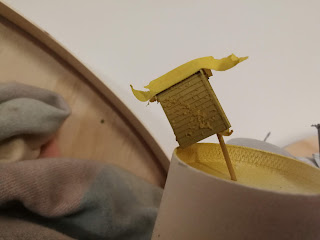 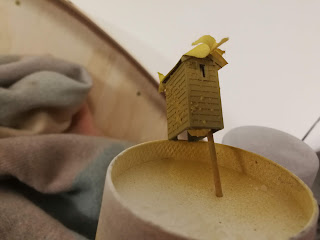 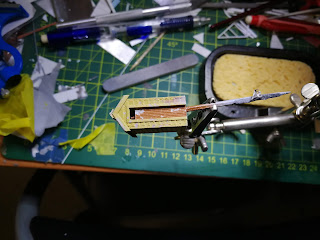 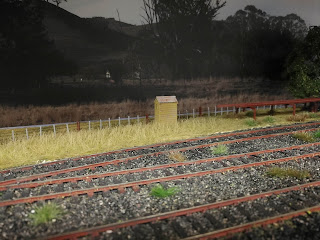 In a normal circumstance, I would have stripped back the paint work and have started again, but as I do intend to heavily landscape around the Out House where only a part this structure can be seen, I decided to leave paint job as is.

As much as I loved going to the event when it was Liverpool in the past several years, the last 2 years have shown that the interest from facility was more focused on how they can expand their own day to day business with other Sport and Recreational areas such as a squash court and a gym areas, which has in effect been forcing the downsizing of the space that was made available to the once a year model rail exhibition, which would have compelled AMRA NSW to find another location to suit this event.

This year, I was involved in running two layouts at this event across the 3 days.
The time came for the event and I did see a few challenges encountered by those coordinating event and with some of the exhibitors, but fortunately no epic disasters were seen. Issues that can be learnings which will hopefully help streamline for a smoother running event for 2020. But certainly, the new venue at Olympic Park in Homebush provided a lot more floor space compared to what Liverpool could have provide now.

In all, it was a good show, a country mile better compared to last years show at Liverpool. From my point of view, it was good to see that there was a good mix of Australian and International themed layout and seeing some of the classic layouts appearing at this event.

Even though it did not seem to drag in the crowds making their way to the NRL Grand Final, however Saturday and Monday seem to have drawn in a good number of crowds to this exhibition.

To close this topic off, well done to those involved in making this event at a new venue as a success given the challenges that they encountered. Hopefully we will get to see this exhibition return at the same venue in 2020. 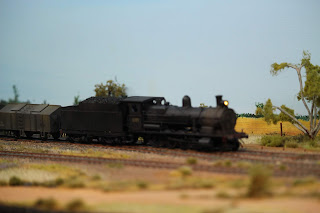 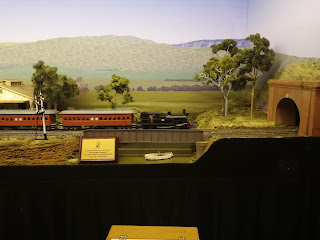 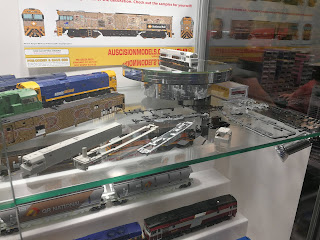 Auscisions Exhibition Announcement of the upcoming NR Class locomotive in N Scale. Could this see a start for a bigger following in Australian N scale?

On a closing note, I have noticed this recognition from of fellow model rail bloggers and along with them I do want to give an honourable recognition to the Layout Passing Time. Certainly a great option for a layout if you do not have a great area of space to run a layout or have a large vehicle and a trailer  to transport a large layout. Certainly, he has proven you do not need a large layout not to just run your trains or impress the paying crowds at an Exhibition. I do hope to see Passing Time at a few more events as well as seeing a few more layouts produced from this railway modeller in the future, as Im sure his next model rail project will be as good or even better. 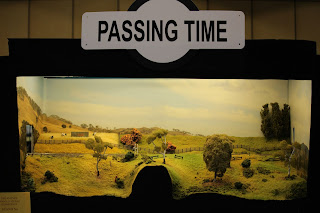 Great impact with detail in the scenery with Passing Time.