Well for me it has been a while since my last post, which is due to a few reasons.
After the Rosehill Racecourse Model Rail Exhibition back in June, I decided to take a couple of weeks off from railway modelling activities as I have been working hard on model rail projects since December 2018 until June this year. I have been working hard in getting Narellan built and helping to get Wingello ready for Rosehill. At that point I just needed a little time off from the hobby.

From June to now, I have had a few misfortunes in catching more than a few of the winter bugs that have been circulating around. Also my work load has also increased a fair bit over the last couple of months in which has prevented me from going into my workshop to continue working on my model rail projects.

I do have to mention in that time I have gone to a couple of Model Rail Exhibitions which have also drawn me away from working on model rail projects. 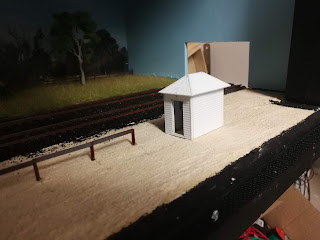 Current work in progress office hut that will be placed next to the coal stage on my Narellan Layout.

I was hopeful to have completed the remaining there structures for Narellan and have a post summarising all of the buildings that I built but hopefully the upcoming weeks will present some spare time for me to get some work carried out and complete Narellan and other minor projects.

However, I did manage to get a little Railway Modelling done.

Now For Something Completely Different! N Scale
When I started to have the faint hearted interest in building my first model rail layout just after getting married back in 2007, My Wife set some very strict boundaries that I could not construct a large layout in the spare room in the house we were renting at the time where she also set a limited area that I could use.

At that time, I felt that the only option was to do an N scale layout. Initially, I was going to do an American N Scale layout, mainly due to the fact that I did not know where to look for any Australian N Scale product and at that time, most American N scale models had the very decent detailed models on the market. That plan ended up not happening and then I decided to look at the British N Scale options, which progress further then my America N Scale layout ambitions. Basically, the Baseboard was constructed, (but done the wrong way), track got laid, but in the end I encountered issues that prevented the completion of this layout due to other several issues that were encountered. After that I did decided to collect my NSW HO Locomotives and rolling stock with the longer term plan in mind to move into a larger home that can potentially cater for a HO scale layout. During this point (several years ago), I went to the Sydney Model Train Expo at Liverpool where I came across a relative of my Wife who just so happened to be heavily involved in NSW/Australian N Scale railway modelling and had a store which was selling the Gopher Models 48 Class Locomotives with a show special combo package deal. My Wife asked me if I wanted one for Christmas, where I responded quickly with the words why not. From there is where my following for NSW N Scale has started gradually to build up. 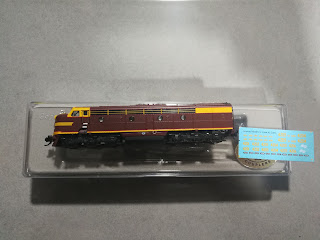 Gopher Models (also known as Badger Bits) N scale NSWGR 42 class ready to run. These models do require you to decal your desired loco running number. I will be applying them in the upcoming weeks and will post how I will apply the decals and share if the decal effort work out or not.

Modelling NSW N Scale Today
Currently N Scale for NSW do not have a great range of ready to run Locomotives and rolling stock available on the market as compared to HO Scale. Therefore, it you want particular items of rolling stock and or locomotives, you would either have to source it as a kit, 3D draw the item and create a casting for it or scratch build it. At this point of time, you can purchase 48 Class, 42 Class and 44 Class Diesel Locomotives from Gopher Models (also known as Badger Bits) that are complete ready to run models, but you will need to apply decals for your desired running number.

There are a few talented railway modellers who have built these models, made castings of them and have made it what they have casted available to the the market. Typically for locomotives, there are mechanisms from locomotives from other global N scale manufactures that are a close match to some of the NSW Locomotives wheel configurations where the railway modeller builds the locomotive body work to fit around the mechanisms. This is often an expensive practice on the basis that you will need to purchase a ready to run locomotive a cost to produce a NSW Locomotive.

Either way, N Scale, not just for NSW Prototyping, but prototyping for other states in Australia is still more for those who want practice in serious railway modelling for the longer term. Though I do expect in time that more ready to run Australian models will make their way onto the market in the years to come which may make N scale an attractive option, especially for those that have only limited space to run a layout. Especially where more more modern day housing is becoming more compact in size compared housing many years ago within major capital cities. 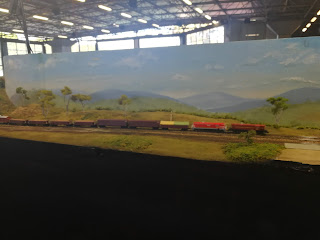 My N Scale Badger Bit 48 Class I purchased years ago with rolling stock I purchased from a deceased estate store that was at the Newcastle Exhibition running on the Tarana N Scale Layout.

Commencing the Painting and Assembling of  the Peter Boorman N Scale Carriage Kits
My Model Rail Club had an invite to attend the Our Town Model Train Show in Newcastle. We decided to take the N Scale layout of Tarana to this event.

At last years NSW AMRA Exhibition at Liverpool I acquired several Peter Boorman N Scale Carriage kits. My intentions was to try and get these kits constructed and completed before the exhibition at Newcastle thinking that I would have the time to complete them, but as stated above, I had those set backs get in the way of completing these models. However, I will like to show what I have covered so far. 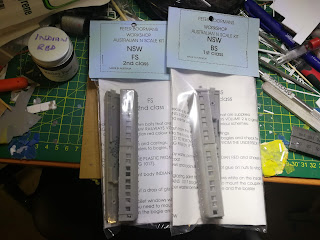 However, I'm hoping it won't be too far off for the next exhibition to not only run these carriages in their completed form, but also have a few of my Gopher Models decal and possibly weathered.  Furthermore, after discussing my current efforts with one of my Model Rail Friends who have already completed the same kits, is that I may need to make other minor modifications to get them working smoothly. 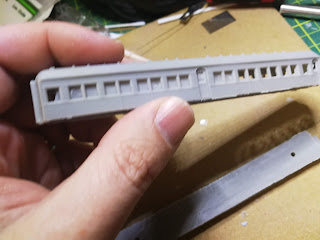 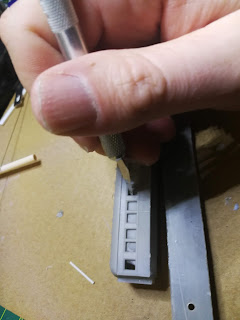 These casted model kits need to be cleaned up by removing the flashing from the windows and around the base of the model and the floor section of the carriage. I used a new blade in my hobby knife to do this clean up work. 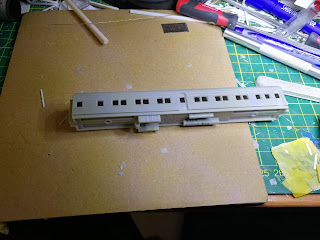 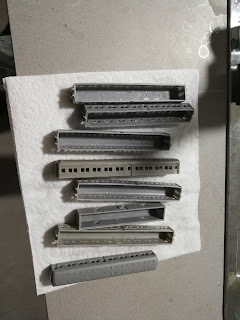 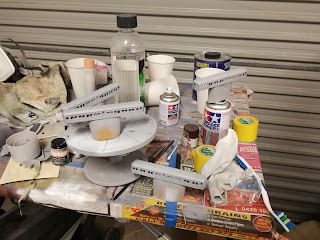 Models were washed in warm soapy water and left to dry, then primed up ready for painting. 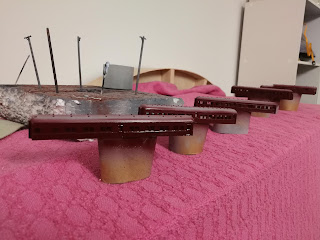 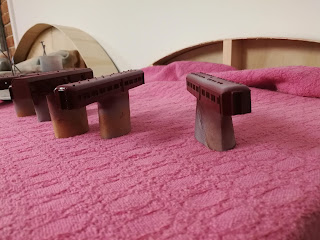 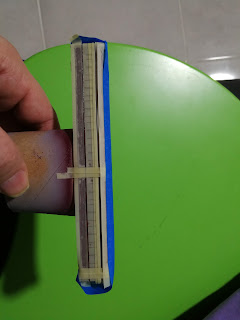 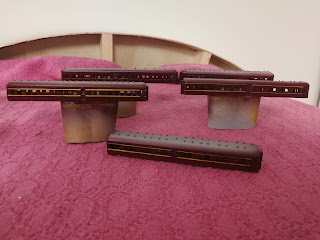 The painful job of masking up seven carriages was done for the yellow lining to be painted on. The kits do get included yellow lining decals, but I feed you get a better result to paint them.
I used a Model Master enamel yellow paint that I find drys very quickly for an enamel paint, roughly about 1 hour after the paint was applied, I decided to remove the tape to checkout the end result. 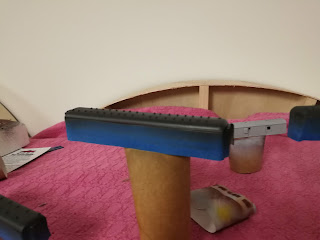 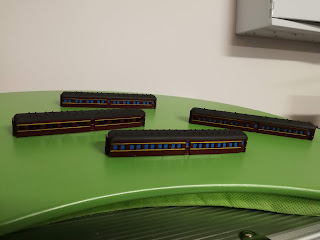 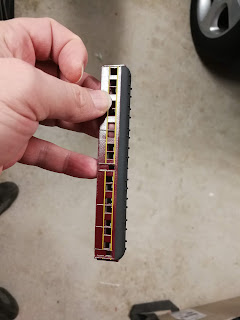 Next phase, I taped up the model to allow the roof to be painted. I used Humbrol 67 (Tank Grey) as the Base coat and later gave a light spray of Model Master Flat Black to weathered black roof colour. 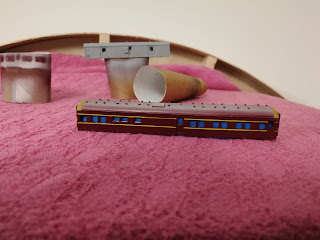 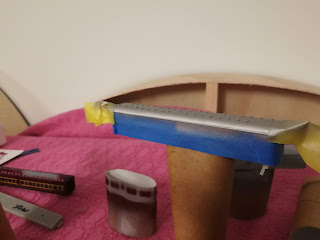 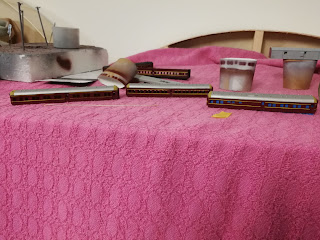 I decided to paint three of my carriages roof sections with the end navy dressing with Humbrol 225 (Middle Stone) and later on finished painting the remainder of the roof with Model Masters Steel paint. 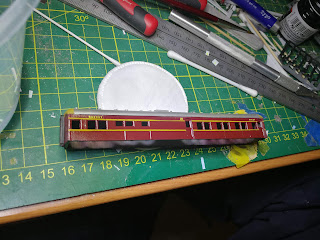 Decals started to be applied. This is the first time that I have ever applied decals on a model rail kit. However I found that you do have to give the decal a good soaking for over a minute so that the decal can be removed form the paper to the model. Placement of decal was done with a paint brush. Once in its final placement, gently patted down the decal with a cotton bud and applied Micro Sol onto the decal to soften the decal to allow it set flush with the profile of the model. 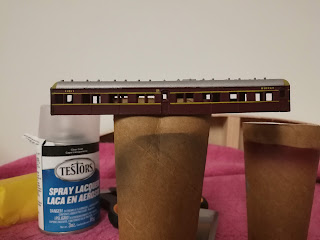 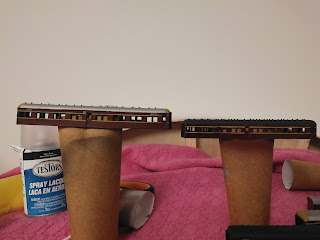 Once the decals were dried up, sprayed on a coat of Testors Dull Coat. Dull coat has not only removed the gloss look from the model but will help sealed the decals on the model. I have put along side my dull coated model next to a yet to be decal and dull coated model to compare the difference in colour. In short summary dull coat will remove the gloss look from the paint work, but also can change the tone of colour on model, giving it a bit of an aged look.

More to come in my N Scale Modelling efforts in my upcoming posts.