Wingello At The Great Train Show At Rosehill Gardens

I will keep this blog short and sweet, but I would firstly like to congratulate the Epping Model Railway Club for putting on in my view one of the best model rail exhibitions that I have seen in my time. Plenty of high standard collection of Layouts were on display at this particular event. 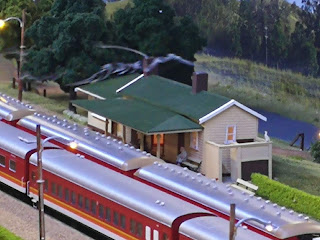 Wingello finally putting on its display at its first exhibition.

Wingello First Exhibition Showing
I have not posted too much on Wingello over the last few several months as my model rail club had planned some interesting cameo features for the layout such as the glowing fireplace and smoking chimneys on the Wingello Main station Building. These cameo features have certainly added life to the layout, which were successful in drawing the attention of the crowds that spent that extra time to photograph, video and have a good look at the layout.

Thankfully, a few of our club members had the appropriate trains to run on the layout, keeping within the NSW Rail Theme. 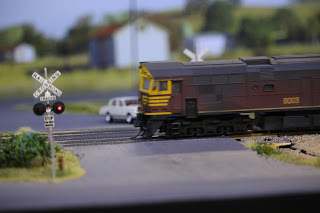 We also had a fair bit of great feedback from those who lived or once worked in the Wingello area. We have taken notes of their stories and reflections for further additions to be added to the layout later on.

For myself and my fellow club members who have been sacrificing every Thursday and Friday nights over the last year on working on Wingello and for those of us who have put other personal model rail projects to one side in order to build the Line Side Structures from their home locations, this was a great delight for us all and also provides a positive reflection on how well my model rail club have functioned with one another to construct and successfully complete this layout. I would like to send my appreciations to those who have gave their kind comments either in person, on social media or via other websites. We are very thankful for those kind comments.

As mention in my last blog post, this will be the only exhibition in 2019 that Wingello will be attending at. Will post dates for future showing when we can make officially announce it for the 2020 Exhibition Calendar.