I have decided for the blogs for Narellan to do more of a progress report rather than focusing on particular tasks in which have been known for in doing in the past.

The reason for this is that I do have a deadline to meet in trying to get Narellan completed in at least in a presentable form for the upcoming Modelling the Railways of NSW event for the 18-May-19 at Loftus TAFE. Therefore, I have been using every bit of spare time I have available to get this layout ready, hence the reason that the blog updates have been a few and far between of late. More on the Modelling the Railways of NSW later on in this post.

Im glad to say, a great amount of progress has been made so far, such as getting trains to run on the layout. I have also have now started on the scenery on the layout.

As mention from my last post, I have been fortunate enough to get a little assistance from a couple of my friends from my model rail club to help out in completing some of the complex tasks. In fact, some of these tasks have been completed in couple of evenings where it would have taken me several days to do. I have few more of those working bee support from my Model rail friends are planned to get this ready for the upcoming convention. 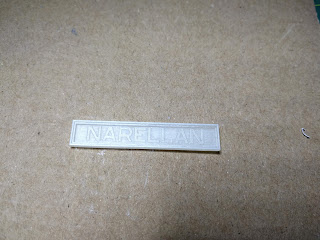 Narellan Line Side Buildings Run Down
One positive for modelling Narellan is that there are few of the original plans available of the station buildings in its various forms over its time of existence. Narellen Station Building seem to have several modifications made to it over time, such as the waiting room being enclosed, in which I could not find any plans reflecting some of the modified waiting room portion of the Station Building. At the very least it provided measurements that I could work from which was a good start. The Cream Shed also seem to have been modified over its time of existence, where it seems to have been extended out compared to the original plan.

However, for the remainder of the line side structures, a fair bit of reverse engineering had to be done to work out the the dimensions of the structures such as the Lamp Shed and the Cream Shed extension. 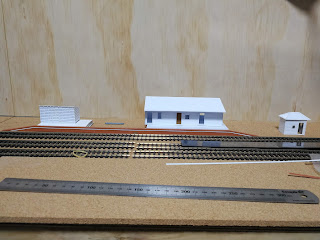 Narellan Station Building
This is a scratched build where I have made use of the Windows that I have drawn up and 3D Printed for Wingello. Doors from the Rail Central kits and Grant Line.

At this stage, a couple more minor detailing will be needed before the final stages of painting this structured in a weathered look will be applied. 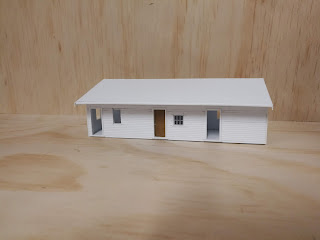 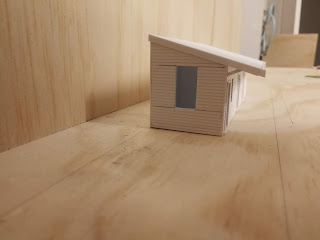 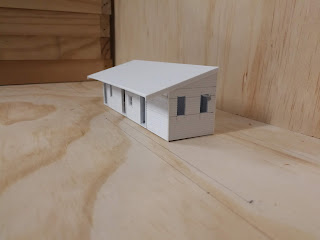 Nearly completed Narellan Station building, just in need of some more minor details such as window and doors to be fitted. Currently being painted with a weathered look.


Lamp Shed
Scratched built from styrene, utilising one of the windows 3D Printed for Wingello. I will be making use of a Grant Line Door. This structure seem to have been unique for Narellan, but seems to have  similar dimensions to a typical weigh bridge office in which I referred in determining the final measurements to construct this building. 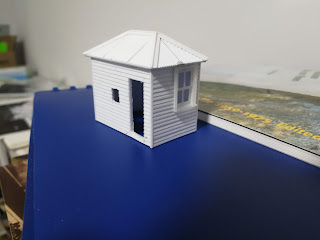 Cream Shed
Cream Shed has been completely scratched build from Styrene.
There are 2 x plans for NSWGR standard Cream sheds that I have found, one of which depicting Narellen's Cream shed. However, it seems that the Cream Shed at Narellan at some point also had an extension added to it. I have modelled the extension variation and have profiled where the extension added to be slopping a bit, as like the real one did in the pictures that I have sourced of it.

There will be a few more structures to be build in the next couple of weeks which will include a portion of the Coal stage. Buildings are currently being painted to be painted placed on the scenic sections. 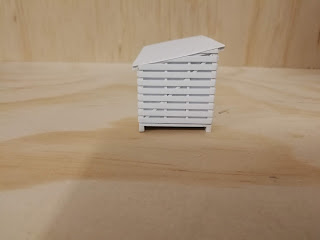 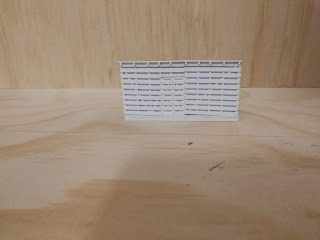 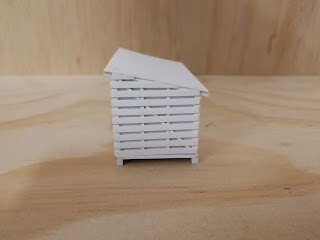 Modelled to look crooked like the real Cream that was once on the Camden end of Narellan platform.

Baseboard Construction
Construction of Baseboards was a new challenge for me where one of my model rail club members was generous in providing a few hours of his time to teach me in the construction of the baseboards.
I will be honest and admit that I am no home handyman, but I have found this task to be not as difficult as it looks.

For the Framework I used 42 mm x 19 mm x 1.2 Meter Pinewood and 7 mm. I have made up 4 x 40 cm x 1.2 Meter boards that were covered with a 7 mm think plywood. On top of the Plywood I have placed on with 6 mm thick Portugal Cork. 6 mm thick Portugal Cork was chosen more so to allow for the Peco Code 75 track to interface with the Kato Code 83 Unitrack. 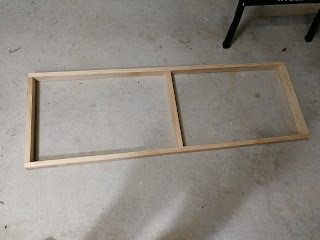 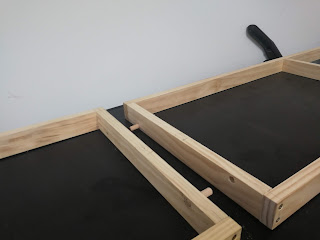 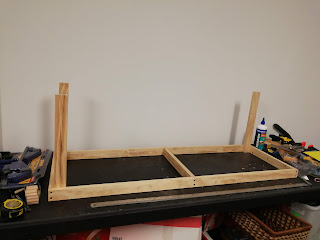 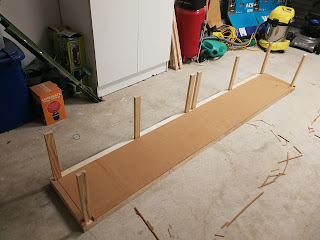 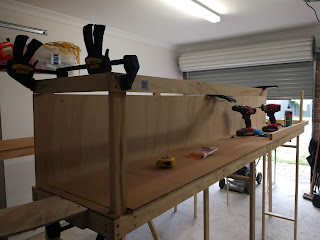 Building up the framework for the Scenic Section of Narellan. 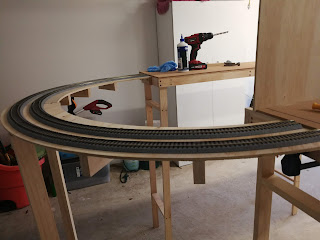 Run around board with Kato track to connect the scenic section to the fiddle yard.

Track and Point Motor Details
Last section (Baseboard Construction) has given away on what Track that I will utilising, but did not give the reason why I am utilising both the Peco Code 75 Track and Kato Code 83 Unitrack.

Basically, Peco Code 75 Track and points are said to be a close match to the track and sleeper profile of what NSWGR were, but I have more so selected Peco on its reliability and high reliability is what I'm wanting for this layout. Peco points are electrofrog which will allow for better electrical connectivity for DCC operation.

The Kato Code 83 Unitrack is going to be utilised for the run around sections which connects the scenic section of the layout to the the fiddle yard. This allows for a no fuss easy quick to assemble and disassemble at future exhibition events, as the curved Kato track allow for a functional curve without making drastic adjustments. Each end of the Fiddle Yard and the Scenic sections have a small lengths of Kato Track the to allow for the interconnection between Peco and Kato Track.

Kato Track does have the perception of being seen as a toy train track, but in practice it is solid and reliable track which does allow for interconnection to some fo the other manufactures track such as Peco.

The Point Motors that I will be using is Gaugemaster SEEP Self Latching Point Motors (PM 4). These point motors are solenoid motors which are mainly just suited for Peco Points or points that are designed to be robust with solenoid motors. I have chosen the SEEP Motors mainly due to the fact they are much smaller then the Colbalt  or the Tortoise Motors. If I had adopted the Cobalt or Tortoise Motors, then I will would have needed to use a deeper timber frame work and which would consume more area especially when transporting this layout in a small SUV vehicle. I will make note that there is one disadvantage of self latching solenoid point motors which I will go through in an upcoming blog. 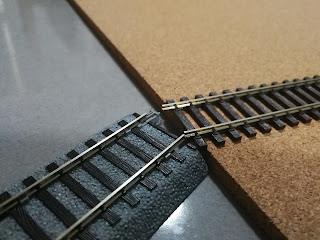 Peco Code 75 track on top of Portugal Cork to allow for alignment with the Kato track. 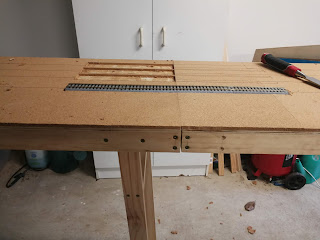 Kato Track being used to help connect up the track on the fiddle yard. This solves some of the issues with track alignment issues when joining up both the fiddle yard boards. 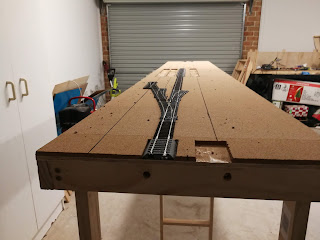 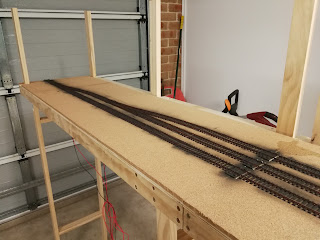 Track laid in the Scenic section. Painted and weathered. Before blasting commences.

Closing notes
There has been a lot more completed than presented on this blog post, which unfortunately do not have much time spare to go through as getting this layout ready for the convention is my on my high priority list. In fact the Blasting of the track work and the wiring up of the track work for DCC operation have been completed and tested as successful. First lot of the line side structures will be painted and completed by the end of this weekend and will be ready to be placed on the layout, with second lot of line side structures to be started very soon. I should have Narellan ready to be in a presentable state by the Modelling the Railways of NSW Convention at Loftus TAFE on the 18-May-19.

I will be doing some belated blogs on the tasks that have been completed in the next few upcoming blogs to cover some of the other work done. Especially wiring up of the layout, which I will plan to do a comprehensive post on, as that has been one of the most testing experiences that I have dealt with this hobby so far and would like to share my challenges and triumphs. But glad to say that I ended up completing the electronics of the layout successfully.

I may not be able to get another blog in before the convention as I will be focused on completing Narellan in a presentable state by the Loftus Convention. Hope to see you there.

Here are some spoiler pictures 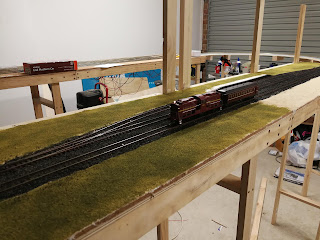 Recently DCC Sound Chip Austrains 4104 with an SDS Models CCA coach doing a few test runs. After a bit of track cleaning, all is working well. No electrical short outs or derailments. 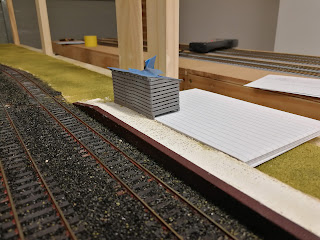 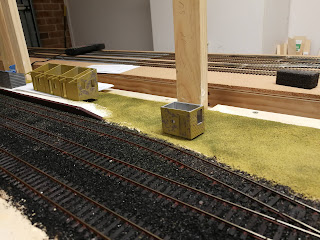 Weathered paint work for the Station Building and Lamp shed. Turfing has been applied ready for the vegetation and other items to be added in the upcoming days. Soon the back scene board will be added.